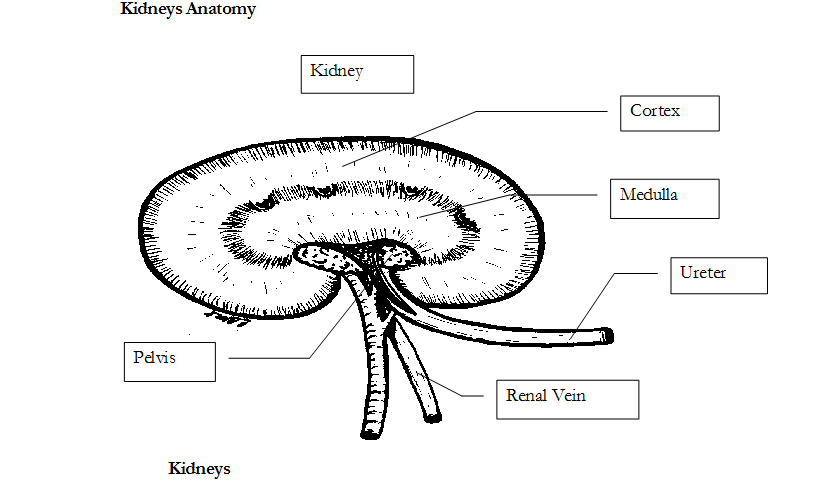 Functions of the Kidneys in Animals

The kidneys are the functional filters of the blood. They contain about a million nephrons. A nephron is composed of a filter called the glomerulus, which filters the blood much like a tea strainer filters tea. Blood is filtered to remove all filterable constituents (tea) which leaves the red blood cells the white blood cells, and proteins in the filtered blood (tea leaves) – all other substances are filtered out – this includes the electrolytes the glucose and toxic substances from the body metabolism. The substances that are filtered from the blood pass through the renal tubules (another part to the nephron) and the good or needed substances are reabsorbed into the blood stream by the tubular cells. Any substance in the blood that is not deemed necessary is passed out into the urine.

The ureter connects the kidney with the bladder. These tubes are at risk of removal by inexperienced surgeons during spaying procedures.

The bladder is the storage location for urine. The bladder has very complex neuro-endocrine control mechanisms that may cause incontinence during disease states. Bladder infections will cause hematuria (bloody urine) in dogs. Bladder stones can form very quickly in infected urinary bladders.

The urethra is the tube from the bladder to the outside. It may become obstructed with stones causing a severe emergency situation. 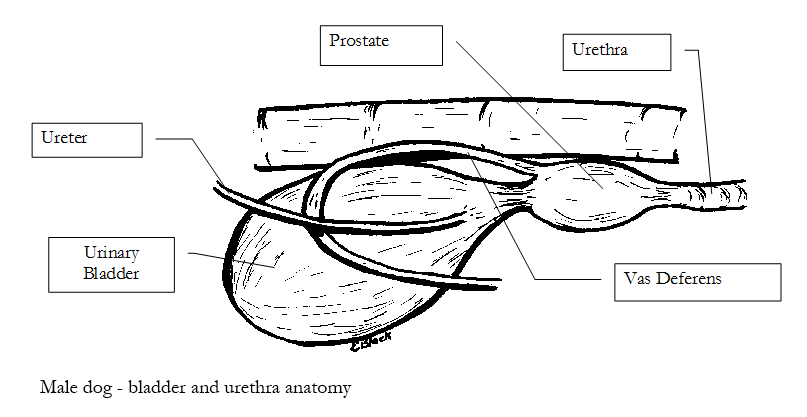 Functions of the Kidneys 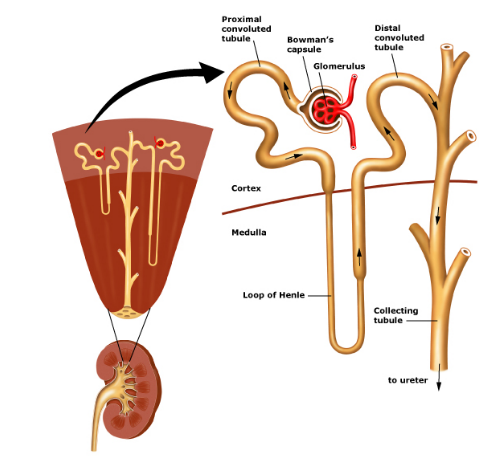 Blood is forced into the small blood vessels of the glomerulus at high pressure. This forces the fluid out of the vessels and retains the cells and large molecules. The fluid collects in Bowman’s capsule and moves through the tubule eventually ending up in the ureter. The kidney then selectively reabsorbs chemicals so that only waste products remain in the urine. When the kidneys fail the glomerulus becomes leaky and proteins leak out into the urine, waste products build up in the body and reabsorption of water is reduced. The animal will be polyuric (increased urine output) and polydipsic (increased thirst). The protein leak will cause weight loss and the toxins will cause vomiting, inappetence and lethargy. The kidneys have a huge reserve capacity and we do not see changes in blood tests till there is 75% damage. Early detection of kidney disease relies on detecting microscopic amounts of urine leaking out from the glomerulus.

The kidney controls the amount of water that is reabsorbed (kept in the body) by controlling the permeability of the tubules and changing the number of ions in the fluid. Water molecules are “sucked” across a membrane to the side with the most molecules or ions dissolved in the fluid. This process is called osmosis and the difference in concentration of two solutions is called osmotic pressure. The more sodium in the urine means more water lost or less retained, this process is called diuresis.

Two hormones act on the kidney to regulate water retention/loss; antidiuretic hormone and aldosterone. Antidiuretic hormone is also know as vasopressin is produced by the pituitary gland. ADH opens extra water channels in the distal convoluted and collecting tubules and pumps sodium ions out of the urine.. This allows more water to move back into the blood and reduces the amount of urine produced. Lack of antidiuretic hormone (ADH) causes the body to produce large amounts of dilute urine; a condition known as Diabetes Insipidus. This is diagnosed by measuring the specific gravity of the urine – this is a measure of concentration. Water = 1. Normal urine = 1.015 – 1.030. If we are deprived of water the kidneys releases ADH and we concentrate our urine. A patient with diabetes insipidus does not concentrate their urine even when deprived of water – water deprivation test.

Diabetes insipidus and diabetes mellitus are unrelated diseases. They both cause large quantities of urine to be produced but one is caused by lack of insulin from the pancreas and one from lack of ADH from the pituitary gland. Before modern urine tests were available doctors would taste urine. Diabetes mellitus is so called because the urine tastes sweet from the latin word for honey “mel” and diabetes insipidus is so called because the urine has no taste from the latin word for bland.

Aldosterone increases the reabsorption of water. It makes the membrane of the distal tubules of the nephron more permeable to potassium and sodium and triggers an active pump mechanism which retains sodium and excretes potassium thereby increasing blood volume and decreasing urine volume. Aldosterone is a steroid produced by the adrenal gland from cholesterol.

The acid-base balance of the blood (pH) is critical to life. It needs to be maintained between 7.35 and 7.45. The pH of the blood is mostly controlled by the amount of CO2 dissolved in the blood: CO2 dissolves in water to form carbonic acid H2O + CO2 = H2CO3 . This then separates in to H+ ions and bicarbonate HCO3. Bicarbonate has a negative charge and is alkaline. 75% of the CO2 in the body is in the form of bicarbonate. The kidney regulates blood pH by controlling the amount of bicarbonate reabsorbed in the collecting tubule.

Erythropoietin is produced by the renal cortex and stimulates the production of red blood cells by the bone marrow. Chronic kidney diseases causes anemia. Synthetic erythropoietin is available for therapeutic use.

Vitamin D3, calciferol, is synthesized in the skin or ingested from the diet and then converted to its active form calcitriol by the liver and kidney. Vitamin D is a fat soluble vitamin. Vitamin D regulates calcium and phosphorus levels in the blood. Lack of calciferol in chronic kidney disease causes secondary renal hyperparathyroidism; low calcium levels trigger secretion of parathyroid hormone which releases calcium from the bones. This loss of calcium makes the bones especially the bones of the jaw soft – rubber jaw – and loosens the teeth. Oral calcitriol and phosphate binders can be used to treat this condition.

Congenital Disease of the Urinary System in Pets

Renal Dysplasia in pets is malformation of the kidney. It is more common in the following breeds – Alaskan Malamutes,…

The following document is a guide for owners on the administration of fluids to chronic renal patients: Your pet requires…