The action of organophosphate and carbamate pesticides is so similar that they will be covered together. They both cause toxicity to fleas and mammals by the same pathway. Carbamates are slightly less toxic than organophosphates, but can be just as lethal. The signs and symptoms of toxicity are the same for both chemical classes. These chemicals were created for chemical warfare and constitute the same action as “nerve gas”. Examples of pesticides containing these chemicals are:

You can usually tell that a pesticide product contains one of these chemical classes, organophosphates or carbamates, if there is a statement that atropine is the antidote on the label.

Animals poisoned with organophosphate pesticides should have prompt and aggressive therapy. For extreme symptoms of organophosphate poisoning, administer atropine until atropinization (dryness of mouth and dilation of pupil) is reached. Usual doses (1 grain = 65 mg) of atropine are 2 to 4 mg (dogs). Repeated doses may be required every 5-10 minutes except in cattle where the effects of atropine generally last for 1-2 hours. Atropine should not be given to a cyanotic animal. After administering atropine, administer an intravenous dose of 2-PAM (Protopam chloride). If symptoms persist, a second dose may be administered.
As soon as possible, hair and skin should be washed with soap and water if exposure was by dermal route. If by ingestion, emetics or gastric lavage are indicated. Although removal of the toxicant is attempted, the reappearance of signs of poisoning may persist for 24-48 hours. Close surveillance of affected animals should be maintained for this time period.

It is important to understand the mode of action of organophosphate toxicity in pets. By learning this, we start to understand the nervous system and how it transmits impulses to the muscles and other body organs. The part of our nervous system that controls automatic functions such as the heart, breathing, sweating, salivation, tearing, glandular secretions, digestion and fine muscle control of the iris of the eye and other organs is called the Autonomic Nervous System (ANS). This “automatic” nervous system controls the things that we do not have to think about to live. We do not consciously think to increase our breathing or heart function as we are running. We do not have to consider how to digest our food or when to produce tears when we are sad. These automatic functions all use the same neurotransmitter, acetylcholine (ACh). ACh is manufactured in the end of the nerve and is released from the nerve to transmit the message from the nerve to the gland or organ that the nerve feeds information to. 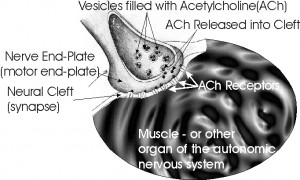 AChE is an esterase (cleaving chemical) that breaks the ACh apart so that the message is transmitted only once. Without the AChE, the ACh would communicate the “jump” message over and over thereby over-stimulating the muscle to jump too much. Organophosphate and carbamate pesticides function by binding to AChE thereby allowing too much ACh to accumulate in the cleft between the nerve and the muscle. This permanent bonding that occurs between the AChE and the organophosphate results in over-stimulation of the end organs of the autonomic nervous system. This binding of the AChE results in continued, excessive production of saliva, tears, vomiting, diarrhea, bradycardia (slowed heart rate), slowed respiration, muscle fasci-culation and so on until death ensues.

Atropine is the antidote for organophosphate poisoning in pets. The action of the ACh can be blocked by the atropine. But the fact that there is too much ACh in the synapse does not change until there has been time to regenerate more AChE. This may take three or four days. Therefore continuous administration of the atropine is needed to keep the animal from dying of poisoning for a three or four day period.

A simple analogy can be used to better illustrate the action that occurs within the autonomic nervous system with regard to acetylcholine (ACh) as the neurotransmitter that is affected by an organophosphate pesticide.

The analogy assumes that a neuron sends an impulse to stimulate a muscle or other organ of the Autonomic Nervous System (ANS). This impulse from the nerve is interpreted as a message that needs to be carried across the synaptic cleft by the messenger. This message is verbally delivered to the receptor, which in this analogy is an ear. So to deliver the message, the messenger shouts “Jump!” into the ear of the receptor. This would cause the muscle to jump thereby completing the function of the messenger.

Figure 10. The Messenger Neurotransmitter Acetylcholine is transmitting the message to the Receptor. This same message would be transmitted by more messengers depending on the magnitude of the desired response.

Waiting for the messenger to complete his duty is the Ax man (Acetylcholine Esterase) which promptly chops the messenger’s head off. This is very effective at preventing the messenger from giving any other messages to the receptor. Thus a messenger is used for only one message. Should there be a need for more messages or stronger messages, there are more messengers sent. Their fate is the same as long as there is plenty of Ax men waiting in the synaptic cleft. 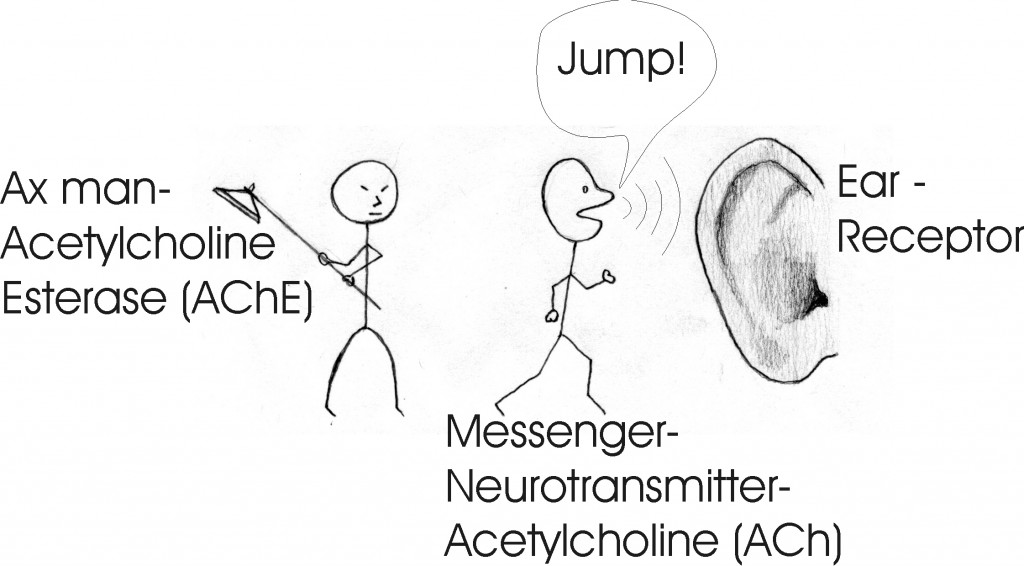 Figure 11. This figure shows the Messenger Neurotransmitter Acetylcholine transmitting the “Jump!” message to the Ear Receptor. Waiting for the message to be given is the Ax-man Acetylcholine Esterase.

Figure 12. This figure shows the Acetylcholine Esterase (AChE) as the Ax Man who cleaves the Neurotransmitter Messenger by chopping his head off.

In the case of Organophosphate (OP) Poisoning, the OP poison ties up the AChE. This is shown in Figure 13. With the Ax man held from performing his duty, the messenger continues to deliver his message over and over and over. This Jump!, Jump!, Jump!, causes over-stimulation of the muscle or other organ that is innervated by the ANS causing the signs of organophosphate poisoning 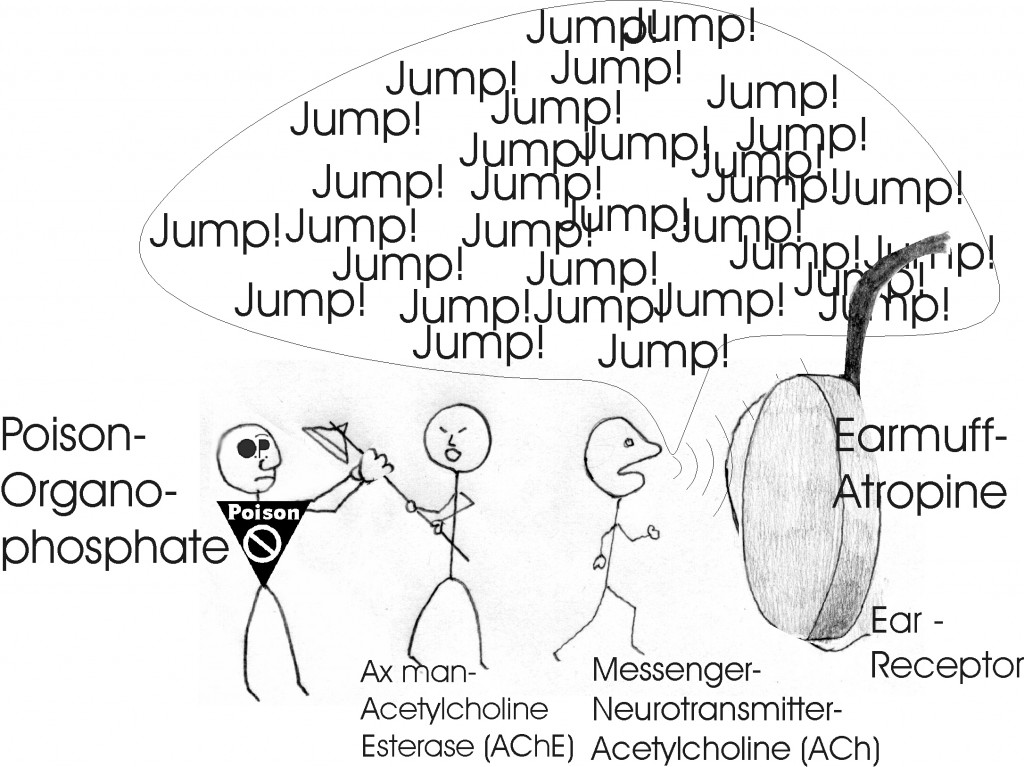 The antidote for this poisoning is atropine. Atropine does not reactivate the Ax man or change the OP to a non-toxic state. The primary effect of the atropine is to act as an earmuff blocking the sound of the messenger shouting JUMP! This effectively stops the clinical signs and will save the life of a poisoned animal. The atropine must be administered for three or four days at a rate of 2 to 4 times per day to maintain effectiveness. It takes this long for new Ax men to be created so that the messenger is killed and the signal is stopped.