Intervertebral Disc Disease is very common in veterinary practice. Many pets have a genetic predisposition to developing disc problems in their back. There seem to be great confusion in the eyes of the pet owning public as well as the veterinary staff as to what a “slipped disc” constitutes. This confusion commonly results in improper recommendations and therefore improper handling of this crippling and life-threatening disease. Because this disease is complex, requiring an understanding of the nervous system as well as the bony structure of the spine few veterinary clients ever achieve a complete understand of this ailment that threatens their loved one’s ability to walk. The veterinary health care team member that understands intervertebral disc can therefore play a vital role in managing this disease by helping the client fully understand the nuances of intervertebral disc disease. 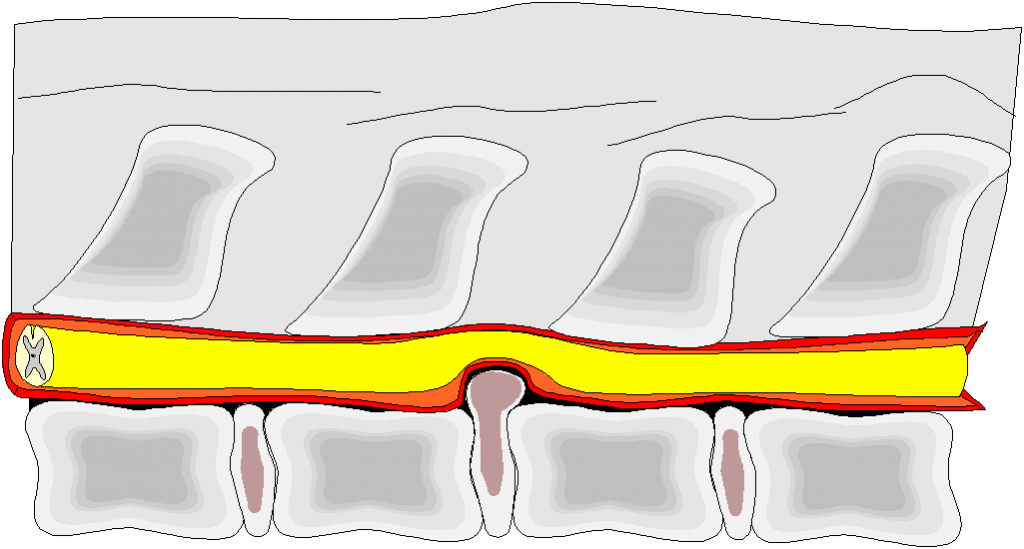 The spinal cord sits inside the spinal canal. The spinal canal is the hollow space inside the vertebrae. The spinal cord is a bundle of nerves that extends from the brain down the back to the rear legs. These nerves allow the brain to communicate its commands to the muscles that control the legs and other muscles of the body. The spinal cord also receives signals from the body that keeps it updated on limb position, and sensory responses such as touch and pain. By testing these responses, it is possible to determine the severity of spinal cord damage and the likelihood of success of medical or surgical care. The most common test is called the “Postural Reaction Test”. This test determines if the brain knows where the feet are. The client may be told “Mrs. Jones, I will now test to see if “Fluffy” knows where her feet are. Right now Mrs. Jones you do not need to look at your feet to know where they are. “Fluffy” however may not know where her foot is right now because the nerves in the spine that relay this information to the brain may be damaged”. These nerves are located on the outermost portion of the spine and are the first to be damaged by something pushing on the spine. Pain, weakness, abnormal reflexes and paralysis are other symptoms of disc disease.

Figure 2. End-on view of a normal and herniated intervertebral disc

Messages are sent to and from the brain along the nerves by electric impulses. The nerves act like a phone wire. If there is a break in the wire the message does not get through. Everything in front of the damaged portion of the spinal cord will function normally so we can localize the damage by testing the reflexes at different points along the body. For example, if the damage to the spine is at the junction between the thoracic and lumbar vertebrae, the front limbs will function normally but the back legs will show signs of postural deficits, pain or paralysis. Most often the disc is herniated on one side and similarly the symptoms will be localized on the same side as the disc protrusion.

Disc disease can be caused by trauma but is usually due to wear and tear. Often a minor action by the dog such as jumping onto the sofa will result in screaming pain. Pet owners often find it hard to understand why such a small jump can cause so much pain. The disc was weakened over time but was not causing any pressure on the nerves so there was no evidence of disease but eventually the outer part of the disc becomes so weak it tears or ruptures. The disc has a tough fibrous outer layer (annulus fibrosis) and a jelly-like layer in the middle (nucleus pulposus) which acts like a shock absorber. Just as a jam donut can explode if you squeeze it the wrong way; a disc can rupture and the inner portion of the disc can burst out and smash against the spinal cord causing lots of damage and inflammation

The spinal cord runs from C1 to the sacrum where it ends and the nerves fan out at the cauda equina (meaning horse’s tail). The most common sites for intervertebral disc disease are the neck and at the junction of the thoracic and lumbar vertebrae. The disc space is identified by the vertebral bone on either side so the thoracolumbar disc would be T13 – L1. (In the dog there are 7 cervical, 13 thoracic, 7 lumbar, and 3 sacral vertebra. The sacral vertebrae are fused and joint to the pelvic bones. The bones are number C1-C7, T1-T13, L1-L7, S1-S3.)

History and Clinical Symptoms
The symptoms are very variable and depend on the severity of the damage to the spinal cord and the location of damage. Chondrodystrophoid breeds of dogs (eg, Dachshund, Beagle, Shih Tzu, Lhasa Apso, and Pekingese) are most commonly affected. In these breeds, there is chondroid degeneration of the disks within the first few months of life. Disk extrusion can occur as early as 1-2 yr of age, and clinical signs are often acute and severe. In contrast, fibroid disk degeneration typically occurs in large breeds of dogs >5 yr old and causes slowly progressive clinical signs.

The most common sites of disc extrusion are the cervical and thoracolumbar regions. The predominant sign of cervical disk extrusion is neck pain, manifested as neck guarding and muscle spasms. The dog may yelp when it turns its head or find it difficult to put its head down to eat from its bowl. There may be thoracic limb lameness or neurologic deficits, these dogs often exhibit a weird gait as if they are walking on broken glass. In thoracolumbar disk extrusion, there may be back pain, evident as hunched back and reluctance to move. Neurologic deficits are usually more severe than those seen in cervical disk disease and range from pelvic limb ataxia to paraplegia and incontinence. In paraplegic animals, the most important prognostic finding is whether or not there is deep pain perception caudal to the lesion. This is assessed by pinching the toe or tail and observing whether or not there is a behavioral response, such as a bark or turn of the head. Reflex flexion of the limb must not be mistaken for a behavioral response.

Physical Exam
A full physical exam is always performed and routine blood work should be carried out to check for infections of the spinal cord and meninges. Proprioceptive/placing reflexes should be tested along with pain sensation and local reflexes such as patellar (knee jerk) reflex are checked. If there is spinal pain then plain radiographs would be the next diagnostic step.

Radiography
Although traditional plain X-rays are limited in their ability to image soft tissues such as discs, muscles, and nerves, they are still used to confirm or exclude other possibilities such as tumors, infections, fractures, etc.. In spite of these limitations, X-ray can still play a relatively inexpensive role in confirming the suspicion of the presence of a herniated disc. If a suspicion is thus strengthened, other methods may be used to provide final confirmation.

Myelogram
A myelogram is simply an x-ray of the spinal canal following injection of a contrast material into the surrounding cerebrospinal fluid spaces. By revealing displacement of the contrast material, it can show the presence of structures that can cause pressure on the spinal cord or nerves, such as herniated discs, tumors, or bone spurs. Because it involves the injection of foreign substances, MRI scans are now preferred in most patients. Myelograms still provide excellent outlines of space-occupying lesions, especially when combined with CT scanning (CT myelography)

CAT Scan (Computerized Tomography)
A diagnostic image created after a computer reads x-rays. It can show the shape and size of the spinal canal, its contents, and the structures around it, including soft tissues. This has largely been replaced by MRI.

MRI (Magnetic Resonance Imaging)
This is a diagnostic test that produces three-dimensional images of body structures using powerful magnets and computer technology. It can show the spinal cord, nerve roots, and surrounding areas, as well as enlargement, degeneration, and tumors. It shows soft tissues even better than CAT scans.

This test should always be carried out before surgery is performed. Although Safari does not have an MRI scanner we can access one. The patient and anesthetic machine are transported to the MRI scanner . The client pays the imaging centre for the use of the scanner and Safari for the process of performing the scan and reading the images. The patient needs to be anesthetized for the duration of the scan – about 30 minutes.

Conservative Conservative treatment means non-surgical. Depending on the severity of symptoms the treatments include: Steroids NSAIDs Rest Physiotherapy It usually…