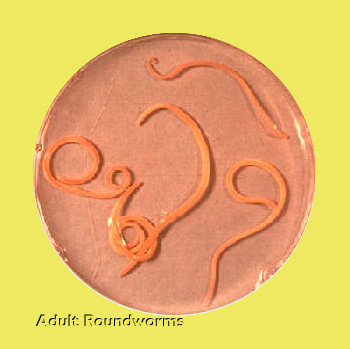 Figure 1. Adult roundworms as passed in the stools of infected pets.

Ms. Sarto: “I was just outside with my new puppy and he became sick and vomited. In the vomit were these worms. What do I do? Is he going to die?”

John: “Ms. Sarto, I can see that you are very upset. No, your puppy is not going to die of these worms. The most common worm for you to see in this manner is called a roundworm. Most puppies are either born with roundworms or have them passed to them through their mother’s milk. Roundworms may migrate through the lungs. They are then coughed up and swallowed. Then, if the puppy vomits you will see these recently swallowed worms in the vomitus.”

Ms. Sarto: “Well, the puppy is acting sick and I saw these worms and thought that they were the cause of his illness. Should I go to the store and get some worm medicine?”

John: “If your puppy is acting sick, you should bring him in for an examination immediately. We need to diagnose what is making him sick. There are many times when a puppy is sick because of other causes and worms are seen in the vomit or diarrhea. These worms are thought by the owner to be the cause of the sickness, when the worms are really “abandoning ship” for a more healthy host. We really need to see the puppy as soon as possible.”

Ms. Sarto: “Thank you, John, for the explanation. I will make an appointment.” 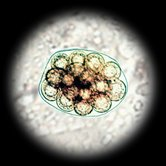 The most common tapeworms may best be identified without a fecal flotation. Gross examination of the hair for rice-grain-like objects, and history of live, small, white-to-cream-colored, flat moving worms suggest tapeworm infection. The eggs are presented in two forms; an egg packet and the individual egg. The egg packet contains many eggs and is oval-shaped or box-shaped and five times the size of a hookworm egg (Figure 2). The individual egg is one-third the size of a hookworm egg and has a thick wall for its size. The spherical interior fills most of the egg and has hooks inside the egg. The hooks may be difficult to visualize but, if seen, they are a positive identification of a tapeworm. Tapeworms may be transmitted by fleas. The animal must ingest the flea, chewing it up in the process. Many more pathogenic (damaging, dangerous) tapeworms are transmitted to animals eating intestines of sheep, pigs, goats, and rabbits. Other species of tapeworms may have similar eggs or may have box like square eggs that are transparent like cellophane. Usually hooks are seen in these eggs. Some of these tapeworms are contagious to people and can cause the death if infected individuals. Flea control is the most important form of control. The animal must ingest the flea, chewing it up in the process. 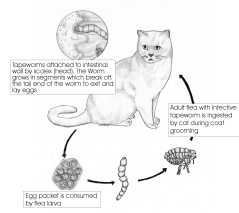 Tapeworms are usually seen in two forms. The fresh form is as small as one-quarter of an inch long, cream to white in color, a flatworm that is motile like an inchworm. This worm may be seen crawling out of the rectum, on the hair by the rectum, on the face of the pet that just licked the rectum, or in the stools. These are pregnant segments that are squeezing their eggs on the fur and surroundings of the pet. These eggs are consumed by flea larva and rest in their stomachs until the flea becomes an adult and is chewed up and eaten by a pet. The tapeworm hatches and attaches itself by hooks on the head to the lining of the intestine. The worm grows multiple identical segments. These segments give the appearance of a tape measure, hence the name. The segments, which are more immature at the head of the worm, mature as the worm lengthens. The segments at the tail of the tapeworm contain gravid (pregnant) segments with eggs ready to hatch in packets. The packets are pushed out of the segment either in the rectum or after the stool has been deposited. The worm segments dry up and form the “rice grain” noticed by the client. This “rice grain” is slightly darker yellow than rice and is found on the hair of the pet, in the pet’s bed or on the perch where the pet sits to look outside. The dry segments can be soaked in water and re-hydrated for examination.

Ms. Jones: “My pet has those white worms crawling from its rectum. I know that they are tapeworms because my previous veterinarian told me so. I would like to stop by and get some tapeworm medication.”

Heather: “Thank you for calling Ms. Jones. Yes, we will be able to help you rid your cat of these worms. Since we have yet to see “Fluffy”, it will be necessary for us to perform an examination prior to administering medications. This examination will include a twelve-body-systems physical examination as well as a fecal test for intestinal parasites such as tapeworms.

Ms. Jones: “Well, we did just move here and we do need to get established with a veterinarian, but “Fluffy” just had an examination before we traveled here. I am sure he has tapeworms and if it is the same to you, I would prefer to just get the medication and not mess with the exam and all.”

Heather: “I understand that you are sure that he has tapeworms and I agree that tapeworms can appear on the rectum much as you have described. But there are many other parasites that can also affect “Fluffy” and some of these are not as apparent. Diagnosing these worms requires microscopic examination of the feces.” Without this test, it is impossible for us to justify treating for just tapeworms.”

Ms. Jones: “We are short on cash because we just moved here and I just want something to treat my cat, what can I do?”

Heather: “I understand your frustration. You are certain of the diagnosis and want your pet treated as economically as possible. In order to fulfill our requirement for a client-pet, doctor relationship, there are certain minimum requirements that need to be met. The best that I can do to meet your needs and our requirements is the following. Please bring your previous medical records from your other veterinarian and we will set up a medical record on “Fluffy”. We will then need to collect a fecal sample as well as one of the worms that you are seeing on his rectum. We will test the feces for other parasites and treat based on this examination alone. We will however need to perform a physical examination every six months on your pet to maintain the necessary doctor-client-pet relationship to be able to prescribe medications for your pet.”

Ms. Jones: “Thank you for understanding how upset it made me to see those worms again.”

Heather: “We will need to deworm and institute a flea control program for your pet again to break the life cycle of the worms. Flea control is imperative in the battle against tapeworms as fleas may transmit tapeworms. I would like to discuss this with you further when you and “Fluffy” come in. When may I schedule you appointment?”

Ms. Smith: “Hello, I am calling because my cat was in your clinic last week for his yearly examination. You supposedly performed a check for worms yet there are small white worms crawling from his rectum right now.”

Tammy: “I am sorry Ms. Smith,-let me understand. You are seeing worms coming from “Fluffy’s” rectum and you paid for an examination of the feces for worms. You are concerned that if we did perform this test, why are worms present? And if we did not perform this test, then why did you pay for it? Is that correct?”

Tammy: “I see in your record that a fecal flotation was performed. We perform this test to check for worms that may be attached or residing in the stomach, small intestine or colon of your pet. These worms pass eggs to the outside through the feces. Some of these parasites are roundworms, hookworms, whipworms, and coccidia. It is unfortunate that tapeworms are rarely diagnosed with a fecal flotation because they crawl from the rectum to deposit the eggs on the fur around your pets rectum. That is to say, they do not deposit their eggs in the feces. Unless we actually see the worms, as you have, it is very difficult for us to say that your pet has tapeworms. We can say that it is unlikely for your pet to have the other worms that I just mentioned.

Ms. Smith: “Well that explains why you missed my cat’s infection. Now what do we do?”

Tammy: “We will need to schedule an appointment for administration of a tapeworm medication. This medication will need to be repeated in three weeks. Because your pet can become reinfected in as little as three more weeks it is imperative that flea control be instituted immediately. Fleas are the transmitting host for tapeworms. When may I schedule your appointment?” 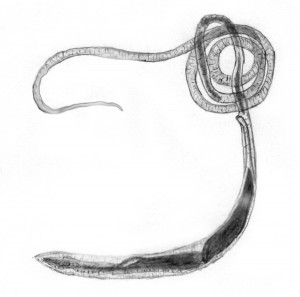 Figure 3. Adult whipworm. The name comes from the resemblance to a coachman’s whip. The head is the smaller end that is embedded deeply in the wall of the cecum.

Whipworms get their name from their “coachman’s whip” appearance. They have a long, thin, anterior end with a larger posterior end (the handle of the whip)(Figure 3). Whipworms have a direct life cycle without any intermediate hosts. The egg passes out of the pet in the stools. This egg (Figure 4) is very resistant to the environment and can last as long as four years. The egg will embryonate (form an infective larva within the egg) and when a pet consumes the egg, the gastric acid will then cause the egg to hatch. Small, newly hatched larvae penetrate the mucosal cells of the colon or cecum and reside inside one of these cells for a short time.
As they grow they become extracellular and their anterior end penetrates deep into the wall of the cecum or colon to cause the signs characteristic of colitis with occasional vomiting. Whipworms take three months to develop, therefore, they are not important pathogens of puppies or kittens. Whipworm eggs have a very characteristic football shape with the appearance of plugs on each end (Figure 4). 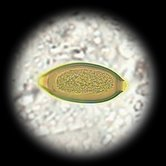 These eggs are passed intermittently in the feces and infections with whipworms may go unnoticed even when fecal flotations are done. Colitis is characterized by increased mucous in the stool which may also contain streaks of blood. Pets with colitis will also have small, frequent stools with straining to defecate as a common sign. Whipworms should be considered in all cases of chronic colitis with occasional vomiting in an adult dog. These pets should be wormed with a medication that kills whipworms regardless of the fecal results. When we worm for confirmed cases of whipworms we should reworm in three weeks; then again in three months. The signs of whipworm infection mimic the signs of chronic giardia infection – both of which can be difficult to positively identify.