Clinical Anatomy of the Pharynx 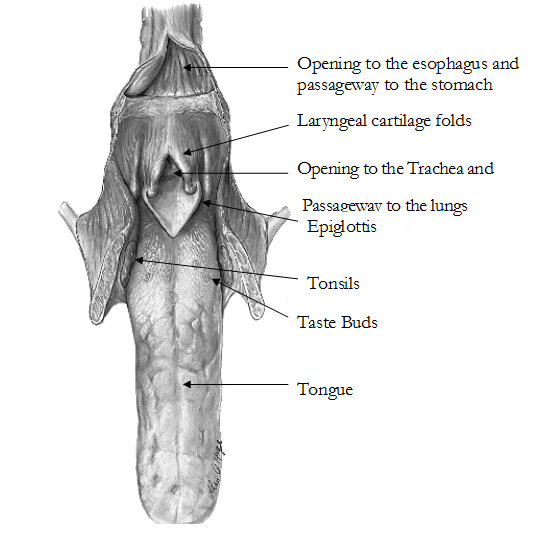 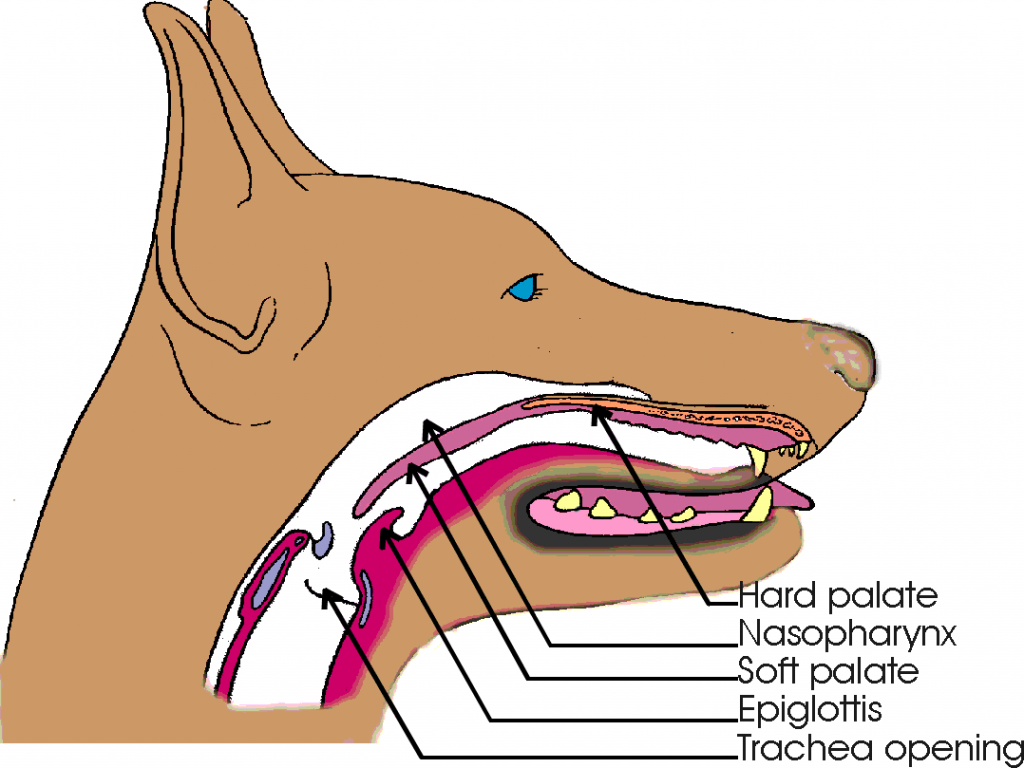 The opening to the digestive system and the respiratory system are shared within the pharynx. The base of the tongue toward the back of the mouth is bordered on the top by the nasopharynx which is the internal opening of the nostrils. The sides of the base of the tongue have folds which attaches it to the pharynx called the glossopharyngeal folds. These folds of tissue hold the tonsils Caudal to the base of the tongue is the larynx which is composed of cartilage and serves as the gateway to the trachea. Above the larynx is the esophagus which food and water go down on their way to the stomach. During swallowing the tongue pushes the food to the back of the mouth where it passes over the larynx into the esophagus. The epiglottis during swallowing covers the trachea. Breathing occurs with the epiglottis open and air passes into the trachea from either the mouth or the nasopharynx.

The roof of the mouth is called the hard palate and this serves as the division between the mouth and nasal cavities. This hard palate is joined to the more caudal portion or soft palate which extends to the epiglottis. A condition known as overlong soft palate occurs commonly in bracheocephalic breeds (English bulldogs, Pugs, Pekinese, Shar Pei) and obstructs the air flowing into the trachea. This overlong extension of tissue extends over the top of the epiglottis and into the trachea. This condition is the reason these pets snort and snore when the breath and sleep. It also greatly impedes their ability to pant and cool them selves. They are therefore very susceptible to heat stroke in hot environments. Surgical correction is recommended early in life. Laser surgery is ideal for this type of procedure.

Some dogs and cats are born with a defect in their hard or soft palate. In the fetus the palate grows from either side and fuses in the middle. Sometimes the two sides do not join completely and a hole is left between the mouth and nasal cavity. This does not affect breathing but during feeding milk can be inhaled into the lungs causing choking and aspiration pneumonia. All puppies and kittens should be checked for palate defects as soon as possible after birth. Defects of the hard or soft palate can be surgically repaired.

The soft palate may also be trapped by the epiglottis in other pets when they have a “reverse sneeze” these are usually small breed dogs who suck their soft palate into their trachea and panic trying to breath. The client may become very worried and think the pet is choking. Allergies may be predisposing causes. No therapy is necessary as the pet cures himself when he exhales or relaxes enough to swallow.

The larynx is a composed of a complex set of cartilages, muscles and nerves that regulate swallowing, breathing and barking. The entrance to the trachea is bordered on each side by laryngeal folds, which open from side to side with each breath. Just beyond these folds are the vocal folds or vocal cords and beyond these is the trachea. Laryngeal paralysis is a common condition in large breed dogs such as golden retrievers and Labrador retrievers. The opening and closing of the laryngeal folds with each breath is paralyzed. The laryngeal folds are flapping in the breath, obstructing the normal air flow into and out of the trachea. The pet is usually OK until stressed. Then the vigorous breathing of exercise causes the paralyzed tissues to swell which causes more respiratory obstruction and panic set in as the pet cannot

catch his breath. This is a true emergency requiring oxygen and perhaps a tracheotomy. Surgical correction is possible with LASER or other surgical techniques.

During intubation – the tongue is pulled forward and the epiglottis is visible as a spade shaped cartilage flap covering the tracheal opening. This flap closes during swallowing to allow food to pass over the windpipe (trachea) and into the esophagus on it’s way to the stomach. While intubating a pet, it is necessary to flip the epiglottis down with the endotracheal tube. The beveled end of the tube is then used to gently wedge the other cartilage folds of the larynx apart so the tube can be passed down the trachea during inspiration.

The size of the tube can be calculated using the body weight of the patient but it should be noted that some dogs have hyperplastic tracheas (Bull terriers) and may need a smaller tube than expected by their body weight. The tube should fit snugly in the trachea but not be so tight it has to be forced down. It there is a cuff on the tube it should be inflated gently till there is some pressure in the bulb. Over-inflating the cuff or using too large a tube will cause damage to the trachea and can induce tracheal collapse post-op in dogs with a predisposition to this condition. The length of the tube should be just long enough to reach from the mouth to the bifurcation of the trachea. If it is too long it will only be supplying gas to one lung, if it is too short it may slip out of the trachea. The tube should be tied securely to the muzzle or behind the head.