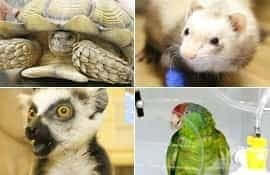 This is a two toed sloth that just traveled from Florida by plane. He is being examined because he has a runny nose and seems stressed from the travel. Many exotic animals must be examined under anesthesia. We use only Sevoflurane, which is a gas anesthesia that has been proven safe for our exotic animals.

The more exotic the animal the less obvious disease becomes. Wild or exotic animals hide their symptoms so as to not appear vulnerable to other animals in the wild that may prey on them. Therefore, an animal that is very sick on the inside appears healthy on the outside. It is this reason that we must sedate and palpate, listen and look at all the body systems to make sure the pet is well. Blood and urine tests are essential to knowing if an exotic animal is healthy or not.

This blue and gold macaw is slightly sedated for collection of blood. Blood collection is done from the right jugular vein in birds as there is not a left jugular vein. Birds sacrifice organ redundancy to reduce weight for flying. Determining the health of a bird depends on blood tests. Even sick birds will eat, preen, talk and perch as if they are normal and healthy. This is a defense mechanism to prevent predators from knowing they are in a weakened condition. 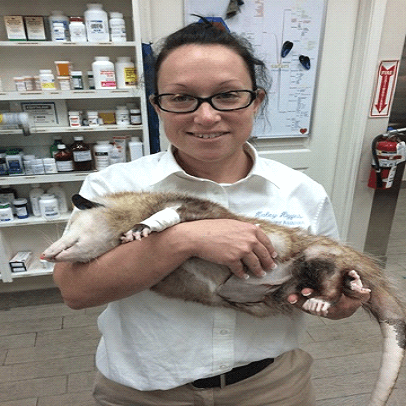 This opossum has been hospitalized at Safari. He cannot urinate properly and has had surgery to redirect urine flow. Notice that there is an IV placed in his arm. This is a native Texas Wildlife and should not be owned as a pet. This opossum, however, is a part of a wildlife exhibit to teach about the animals found in Texas. 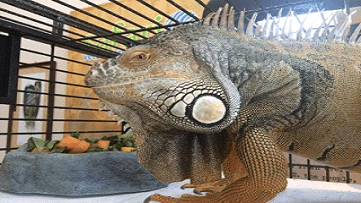 This iguana is in great health. Notice the color of his head and body. He is at Safari for boarding. Also notice the food he is eating is healthy, colorful and fresh. 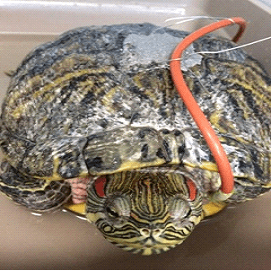 Reptiles are fraught with nutritional disease. The most common complaint is that they will not eat. This Red-Eared-Slider turtle is 35 years old. She has stopped eating because she is full of eggs. So we placed a feeding tube to supplement her food intake. This tube was removed once she started eating on her own. 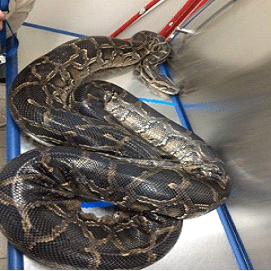 Venom is a 12 foot reticulated python who is not eating. We force fed one dozen eggs to help him get some healthy protein. 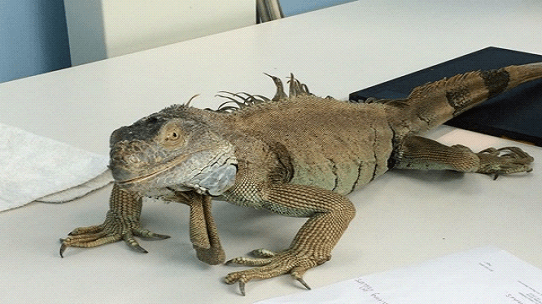 Iguanas that do not eat properly suffer from metabolic bone disease. See the tail and back toes, how thin and crooked they are. There was improper calcium balance and subsequent fractures that could have been prevented with the proper diet, proper lights and proper temperature for digestion. This iguana is on the radiograph table to get x-rays of his spine, as he has recently lost the ability to move. 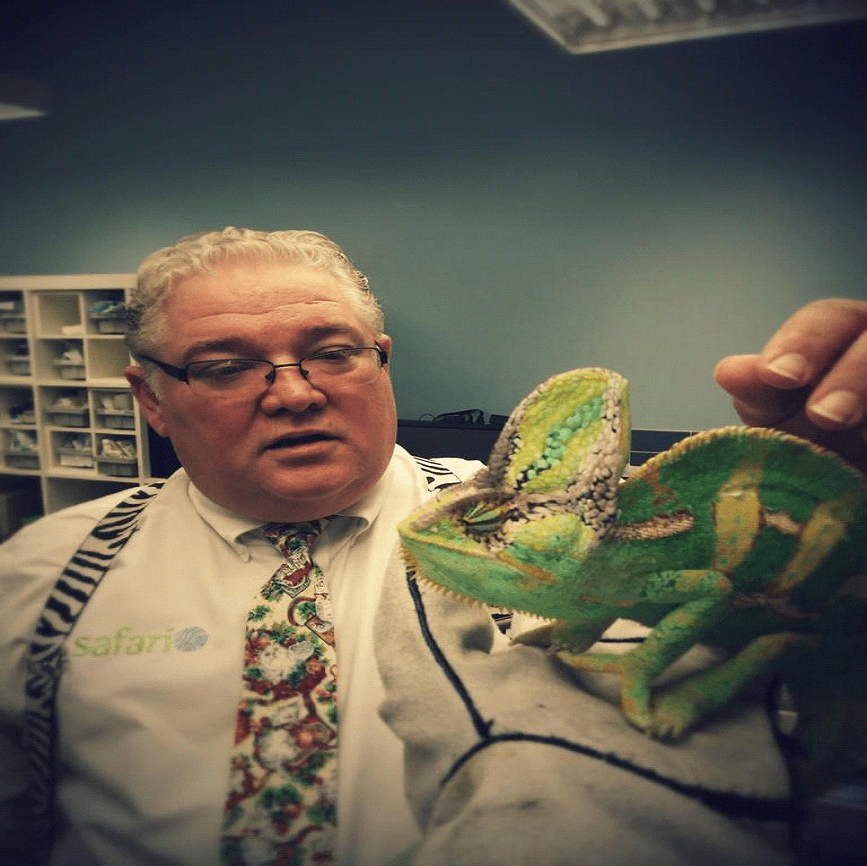 This veiled chameleon is not feeling well. We are performing radiographs to determine if she has eggs present. This is a common cause of lack of appetite. Chameleons are among the most difficult reptiles to maintain in captivity. They have strict requirement for temperature and humidity and light. Some hobbyists, when trying to do all these things the best, cause too much light resulting in “sunburn” of the eyes. Chameleon’s eyes move independently of each other in the search of prey and give stereoscopic guidance of the long sticky tongue. If the eyes are damaged the lizard cannot eat.This creature is in good health, has great color and good body condition. 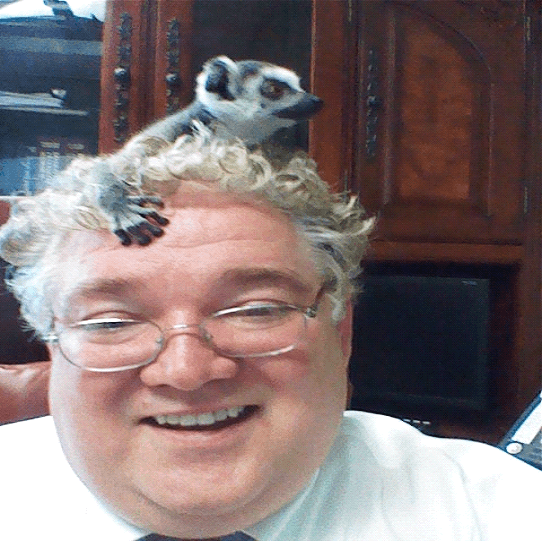 This is a baby ring-tailed lemur. His name is “Zippy”. As a baby he spent most of his time on the top of someone’s head – just like he would hold onto the back of his mother in the wild. Lemurs are primates, but have a different lineage than the common new world or old world monkeys. Whereas, the old world monkeys (Apes, chimps and macaques etc.), share diseases with humans, the lemurs do not. This makes them somewhat better pets. Lemurs have a social hierarchy that is dominated by the females, therefore the subservient males are better human companions. Lemurs have very sharp comb-like front teeth that can lacerate human skin with ease. Unfortunately, this is a common occurrence. 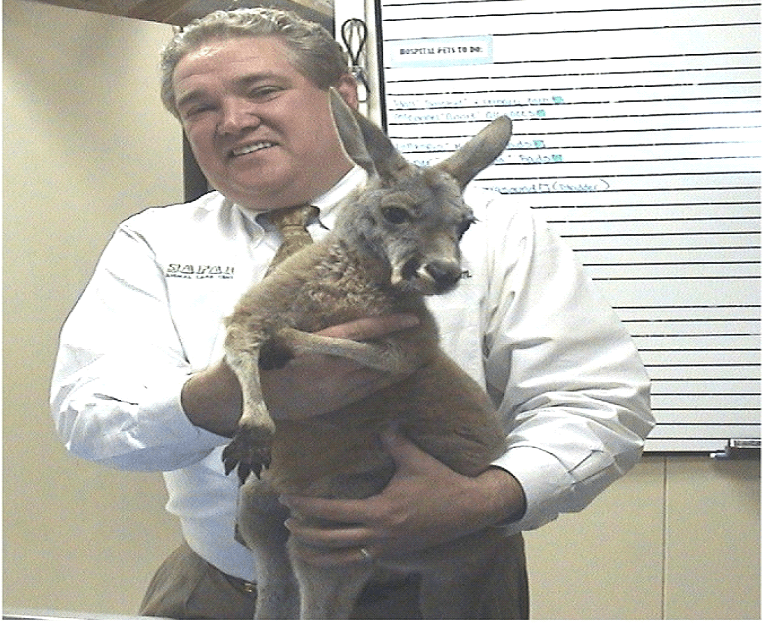 Kangaroos are not uncommon pets. This is a young red kangaroo who has a deficiency of selenium and vitamin E. Kangaroos need supplemental selenium if living here in Texas as the soil and plants do not have enough. 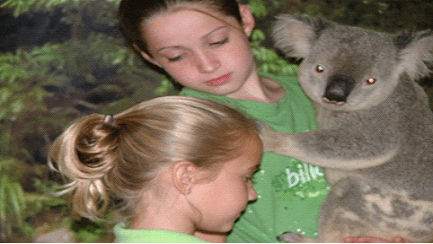 This is my two daughters, Annsley and Kippin. Annsley is holding the Koala bear. I have traveled to Australia many times and my daughters have been with me on two occasions. They learned to surf while there as well.Koala bears in Australia are threatened by a virus similar, if not identical, to the canine distemper virus. We hope they will survive this challenge. 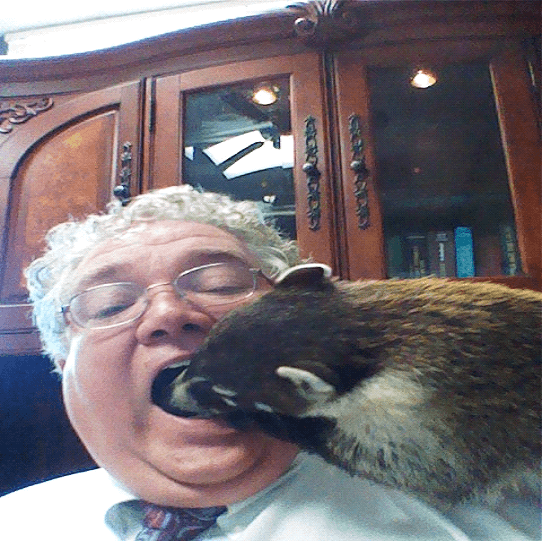 This is “Stanley” he is a coatimundi. These raccoon-like creatures are native to Texas and South America. Stanley is doing his daily check of my teeth. This is a curious behavior common to all coatimundi.Stanley has a mind of his own and trying to stop him from checking teeth is not a good idea. Neither is taking a toy from him. He is very possessive and likes to play with my mouse pad, running away with it most of the time. Heaven forbid that I try to take it away.Stanley loves blueberries and cat food which he makes a mess of eating. He is happy to snuggle up for sleep and does not mind being carried by his tail. 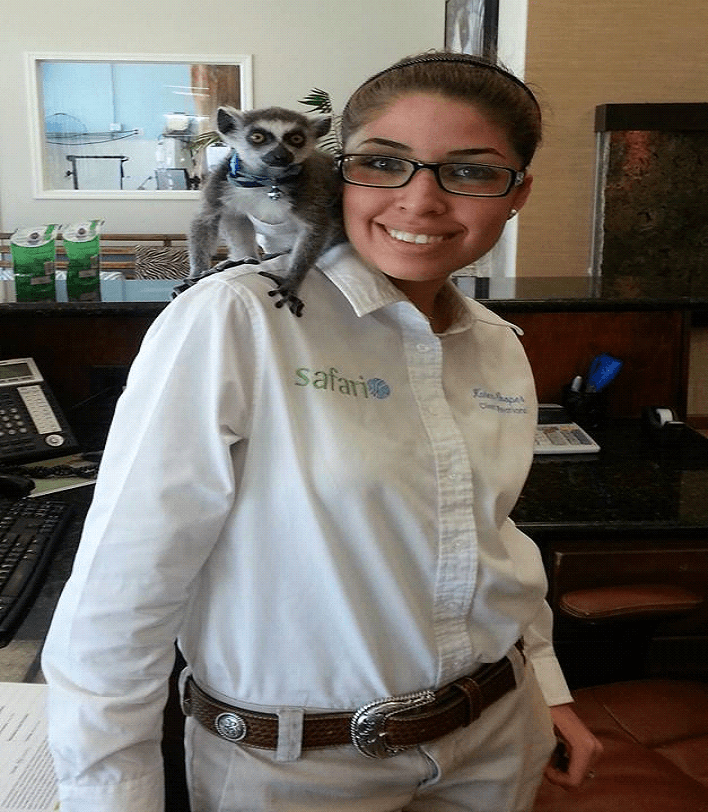 Our Safari staff receive training every week. We want them to be comfortable handling the exotic animals that we treat. This is Karen with a young ring-tailed lemur on her shoulder. Karen is one of our receptionists. 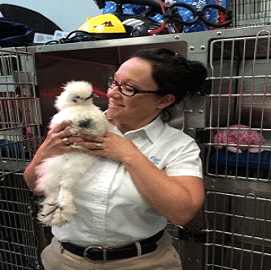 Chickens are common pets. Particularly the more exotic breeds such as this Silkie. This chicken has crop impaction from eating too much sand and gravel.

We sedated her and by using an endoscope were able to flush her crop.

Unfortunately, she filled it up again while the owner was not watching and did not survive the second bout. 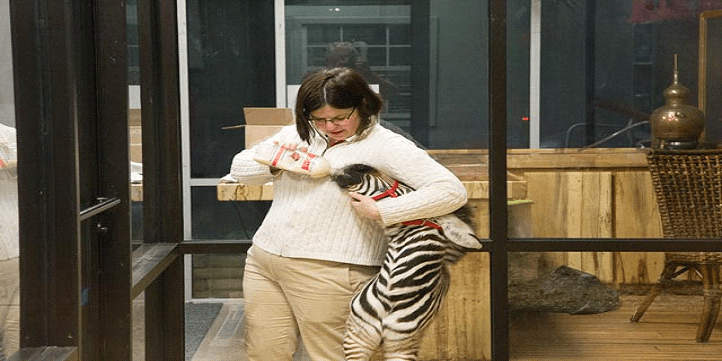 This is Silverdale a Grants Zebra who was abandoned by his mother at one day of age. He is shown here at 10 days of age. He was bottle fed every 4 hours, then every 6 hours for several weeks. He was weaned at 6 months of age. Silverdale was very sick at first because he did not receive his requisite immunity from his mother. He was on IV fluids and antibiotics for the first week of life. Now he is a big boy at my farm. We see him every day. 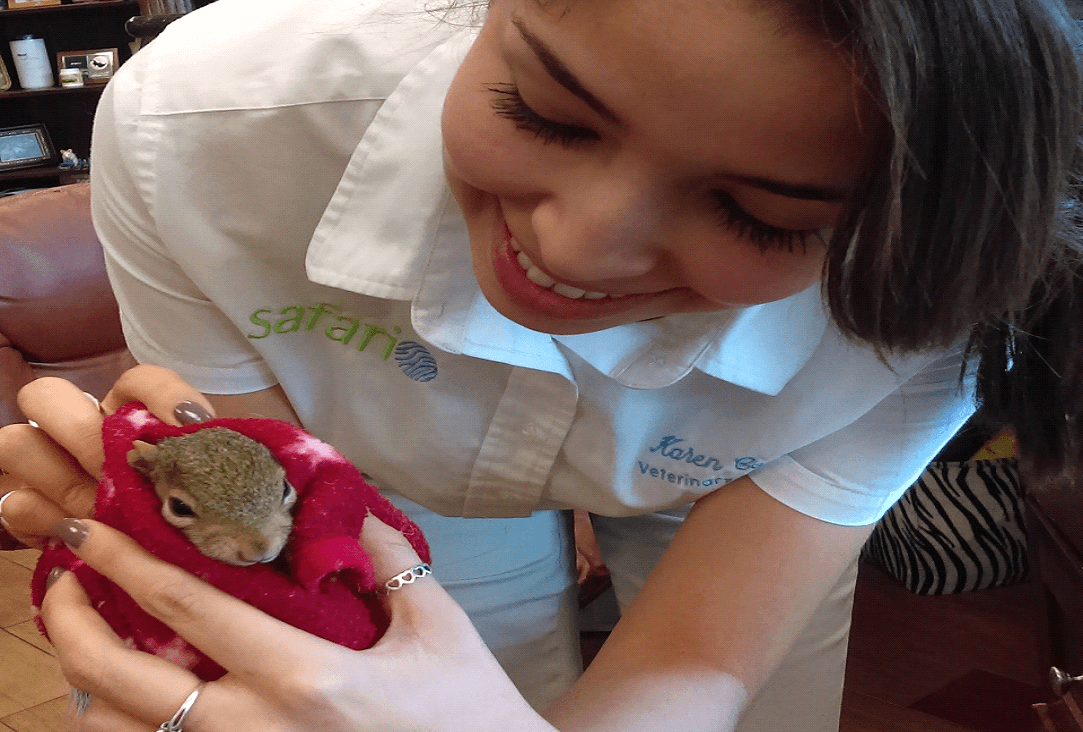 At Safari we treat wildlife. This baby squirrel was presented with a broken leg. We did surgery to restore the leg and the squirrel was returned to the wild once healed. 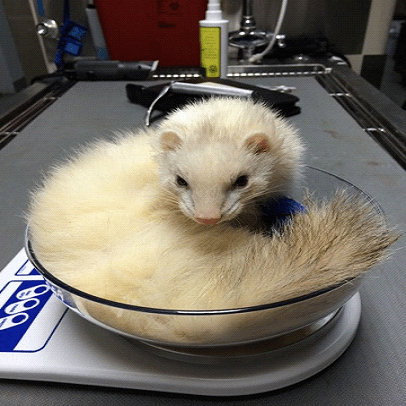 Ferrets are great pets. They have their own set of needs as they are an obligate carnivore. They must be fed non-vegetable containing foods. Ferrets are usually speyed or neutered very early – before they become your pet. This process sets them up for some hormonal disease later in life. If you notice your ferret loosing hair along the tail or rump then this is the first sign.

Stem Cells in a ferret 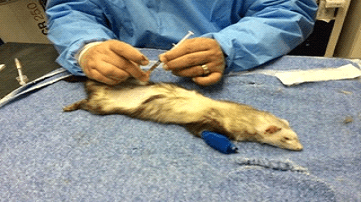 This ferret is paralyzed from the waist down. We used stem cells to help regenerate the nerves. IT WORKED!!This is showing the administration of cells. The Stem Cells were harvested from the ferrets own fat then processed and injected. The ferret then went through therapy in the underwater treadmill to teach him how to walk again. 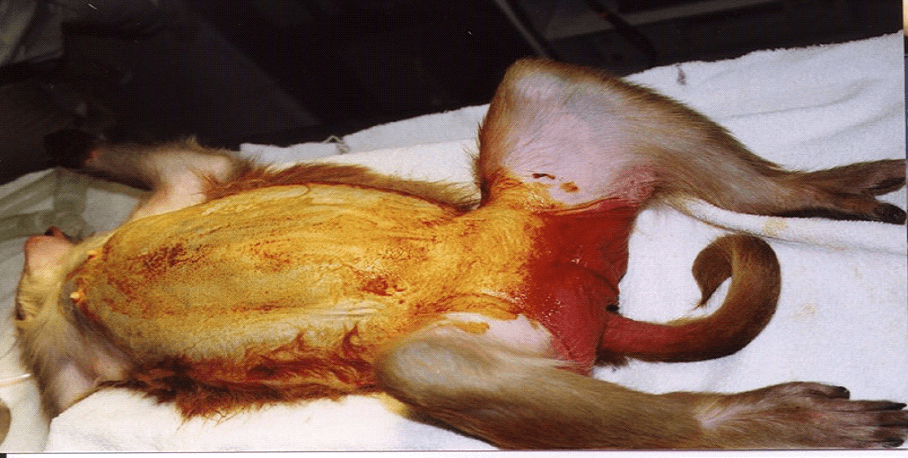 This is a monkey with “Sex Skin” a common presentation of a monkey in heat. This girl is ready for surgery as she has endometriosis and adhesions of her uterus to the other abdominal organs. Her uterus forms large cysts that rupture and a chocolate milk like substance pours out. This is a very serious disease requiring hours of surgery. This pet is very much a part of the human family. The surgery was successful and all is well now. 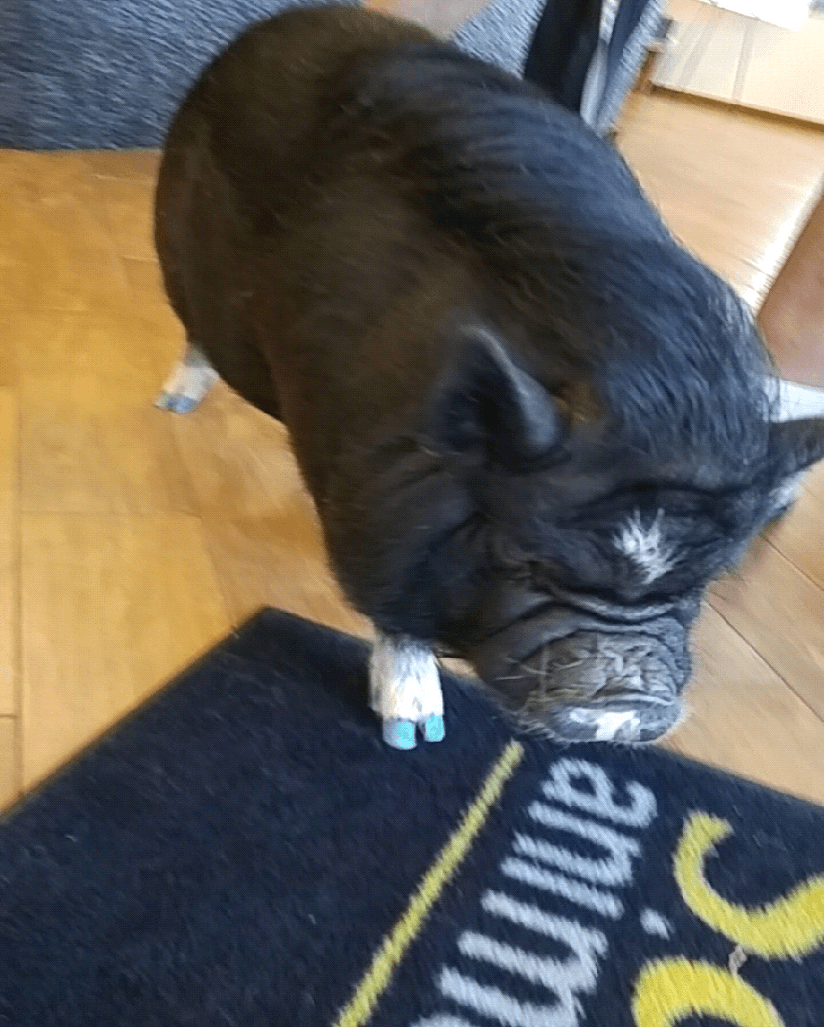 Potbellied pig care at Safari involves trimming the hooves, trimming the tusks and in this case, painting the hooves as well. This process usually requires sedation, or in the cases where sedation is not used, requires ear plugs. Pigs are loud!!

Potbellied pigs must be vaccinated to prevent respiratory disease and other pig only disease. They also must be wormed and checked for mange. All of these illnesses are common, but can be prevented if given the proper veterinary care and attention. 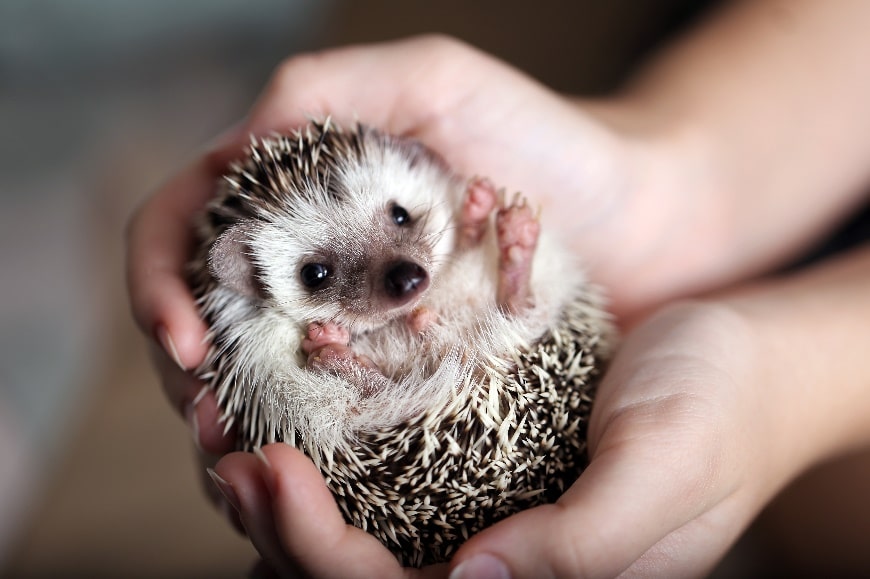 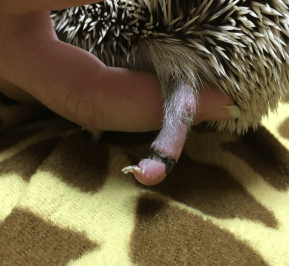 Hedgehogs are adorable creatures. Occasionally they will get a constricting string or band of hair around their foot. This little hedgehog had such a band that shut off the blood supply to the foot. Another vet had recommended amputation but at Safari we recommended using Conditioned Media from our Stem Cell Cultures to stimulate skin and hair growth. So far so good!! 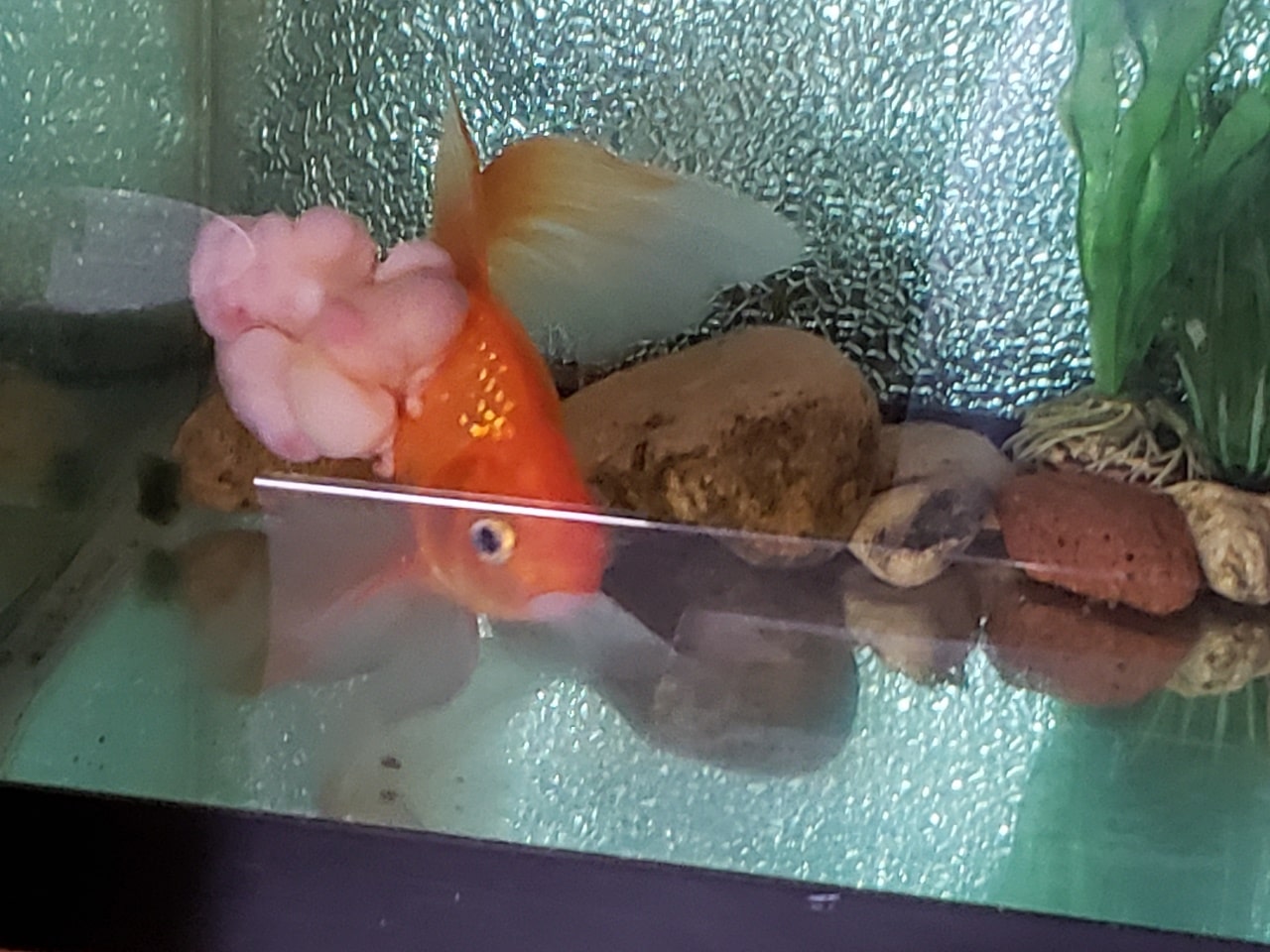