Heartworms cause disease which is severe and can be fatal to infected dogs. This disease affects many systems and can cause many signs. The most common sign of heartworm disease however, is “NO SIGN AT ALL.” Most of the dogs that we diagnose with heartworm disease are healthy in appearance and action. They are dogs that may have been on an inconsistent heartworm preventive program or stray pets that appear healthy.

Adult heartworms cause disease by disturbance of the blood circulation through the lungs. The presence of adult heartworms in the arteries will cause changes in the vessel wall to develop within days. These changes are reactions to the chemicals and waste products produced by the heartworm. These discharges from the heartworm cause the blood vessel walls to respond with immune mediated cellular infiltration (white blood cell invasion). White blood cells (lymphocytes, neutrophils, monocytes) move into the blood vessel wall to neutralize the foreign substances liberated by the heartworms. This cellular reaction leads to the release of inflammatory mediators from the white blood cells causing subsequent tissue damage and inflammation. This reaction compromises blood flow through the blood vessel. Compromised blood flow leads to turbulence and activation of platelets and clot formation. Thickening of the blood vessel wall also occurs (villus hyperplasia) that causes uneven blood flow. These factors result in reduced transfer of oxygen and carbon dioxide to and from the red blood cells and blood. The cellular infiltration and inflammation also cause reduced compliance (stretching) of the arteries. This reduced compliance will lead to pulmonary hypertension (high blood pressure). High blood pressure causes fluid to leak out of the blood vessels of the lungs flooding the air filled spaces (alveoli). Fluid filled alveoli cause bronchoconstriction (narrowing of the airways) which stimulates coughing.

As the hypertension continues, the right side of the heart is forced to pump the blood to the lungs at increasingly higher pressures resulting in dilation of the right heart and main pulmonary artery. This back pressure causes sludging of blood flow from the liver and abdominal organs resulting in fluid leakage from the surface vessels of the congested liver and internal organs. This fluid leakage accumulates in the abdomen and is called ascites. Fluid in the abdomen causes problems by pressing on the diaphragm reducing its motion and further compromising respiratory function. The effects of reduced blood flow from the abdominal organs include reduced metabolism in the liver, reduced digestion by the intestines and reduced blood filtration by the kidneys. Microangiopathic hemolytic anemia is a condition that can develop in the smaller vessels of the lungs, whereby small fibrin strands in arterioles cut (“clothes line”) the red blood cells as they traverse the vessels, resulting in anemia. The general condition of the patient deteriorates; resulting in loss of body weight, poor hair coat, reduced resistance to infection and reduced exercise tolerance and generalized debility. Other signs include coughing, rapid respiration, anemia, and severe ulcerative dermatitis. The heart will continue to dilate until the valve leaflets do not touch causing a murmur to develop along with the poor blood flow. The main pulmonary artery will also continue to bulge and may develop an aneurysm. Acute death may result from splitting of the main pulmonary artery or tearing of the right heart during exercise of a severely affected dog. The pulmonary hypertension and reduced compliance of the pulmonary vasculature will eventually cause bleeding into the airways, and subsequent bleeding from the mouth or nose. Activation of the coagulation mechanisms may result in disseminated intravascular coagulation (D.I.C.). This occurs when the tissue damage in the lungs is severe. This damage causes activation of clotting factors and subsequent clot formation. If the reaction is severe enough or chronic enough to use all the clotting factors then excessive bleeding is seen. The dog will likely bleed to death into his lungs. It is not uncommon to have a client find their heartworm positive dog laying in a pool of blood one morning.

Caval Syndrome is caused when heartworms reside in the vena cava causing signs and symptoms much different from the typical pet with heartworms. The vena cava is the vessel that delivers venous blood from the lower half of the body to the right atrium of the heart. When heartworms cause obstruction of this vessel, life threatening consequences ensue. The blood undergoes hemolysis as it passes by the heartworms in the vena cava. This causes the pet to become jaundice (yellow color to the tissues) and also will cause hematuria (blood in the urine). In more acute cases collapse is seen with the pet presenting in lateral recumbency. Animals with caval syndrome are usually moderately anemic from the hemolysis and have an elevation of liver enzymes from the passive congestion of the liver. This passive congestion is caused by severe obstruction of blood flow from the lower part of the body into the heart. Caval syndrome in dogs is also called “liver failure syndrome”. There is a characteristic heart murmur that accompanies caval syndrome that has a third heart beat which results in an irregular gallop. Mild cases of gallop rhythm will have very few symptoms – perhaps only a jugular pulse or mild elevation of the bilirubin and liver enzymes. Ultrasound evaluation of these pets will show heartworms interfering with the action of the tricuspid valve. In a normal asymptomatic heartworm positive dog being evaluated for therapy, caval syndrome can be a major cause of complications. Pets with caval syndrome cannot be treated like other pets with heartworms. Heartworm extraction must be done prior to the more traditional therapy. This is done as an emergency procedure in the acute cases with light sedation and local anesthesia and under general anesthesia in the mild cases. The procedure involves passing extraction forceps down the jugular vein into the vena cava as shown in the following illustration. The forceps are used to grab heartworms and pull them out of the heart. This can be done under ultrasound guidance. About 50% of the pets survive this procedure. Almost none survive without the procedure. 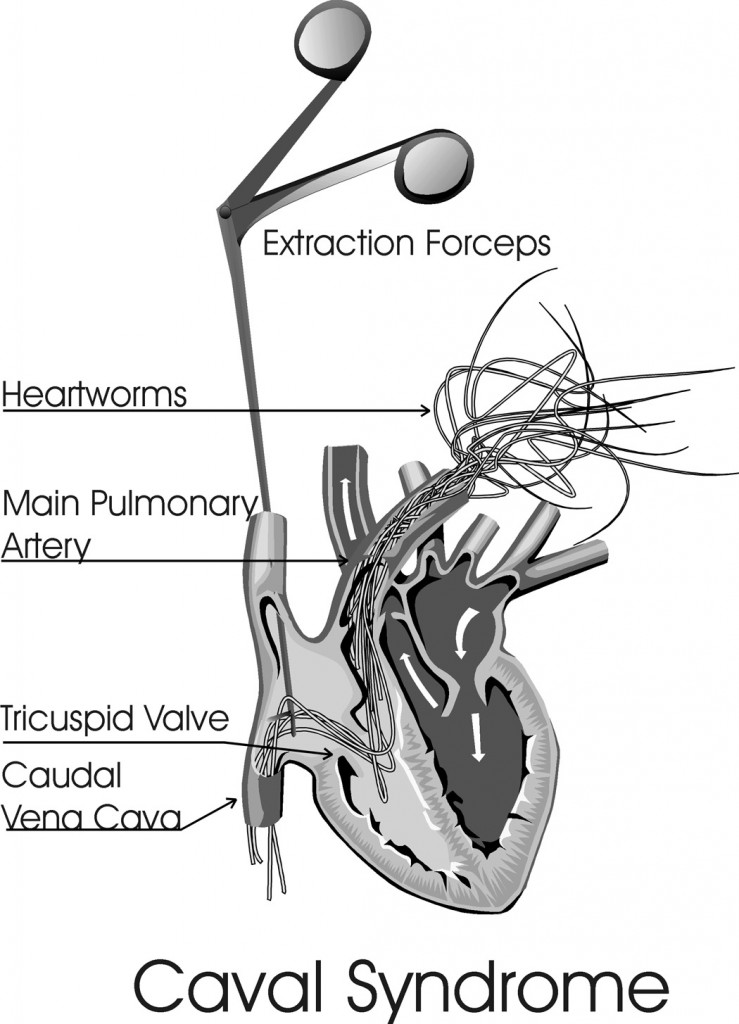 The prevalence of D. immitis infection in cats has been evaluated worldwide. A survey conducted in the southeastern United States in 1990 of heartworm infected cats demonstrated a prevalence of 4.3% to 10% in the shelter cat population. The incidence of heartworm disease in cats may be as high as 15% in endemic areas. This prevalence estimate probably underestimates the true prevalence because only cats with adult worms were considered in the results. In any case, the results of these studies indicate that cats residing in endemic areas are at risk to heartworm infection.

Cats of all ages are susceptible to heartworm infection. Male cats appear to acquire more adult worms than do female cats. Outdoor cats are more likely to become infected than those that remain exclusively indoors. Heartworm infection in cats is characterized more frequently by single-sex infections (approximately one third of infections) and by much lower numbers of worms (two to three worms per cat on average) than is normally seen in dogs. Concomitant infection with feline leukemia virus has been reported but does not appear to be a risk factor for the development of heartworm disease. Heartworms do not live as long in cats (approximately 1-2 years) as they do in dogs (approximately 5-7 years), and many cats are able to clear the infection spontaneously.

Aberrant migration (migration of heartworms to tissues of the body other than the pulmonary arteries and heart) of D. immitis may be more common in cats than in dogs. Difficulty in identifying these infections antemortem may also lead to an underestimation of the prevalence of D. immitis infection in cats.

Feline heartworm infection should be considered in cats with signs of respiratory or cardiac disease or in cases where chronic vomiting is a complaint. Some differential diagnoses for feline heartworm disease include bronchitis, asthma, hairballs and cardiomyopathy, as well as infectious causes such as Aelurostrongylus abstrusus (lungworm) infection, Paragonimus kellicotti infection, Toxoplasma gondii infection and disorders causing pleural effusion. A presumptive diagnosis is usually based on clinical signs, an opportunity for exposure to mosquitoes and supportive laboratory testing. In dogs, performing a heartworm test is commonplace and the results of testing are used to support a diagnosis of heartworm infection. Until recently this type of reliable testing was unavailable for feline patients; however, with the development of a recombinant heartworm antigen (rHWAg1), a sensitive and specific test for feline heartworm disease is now available. 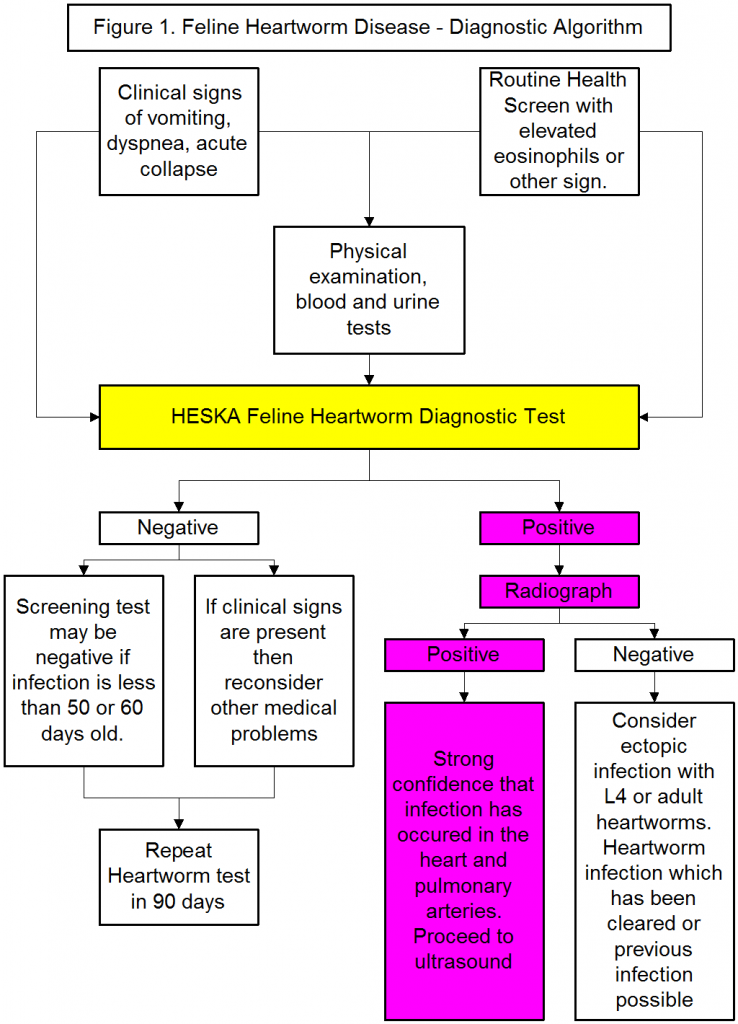 Reporting and Interpretation of Test Results