Conservative treatment means non-surgical. Depending on the severity of symptoms the treatments include:

It usually takes 4–6 weeks for the dog to return to normal but improvement should be seen within 2–3 days of starting treatment. If the dog does not respond to treatment then surgery should be carried out as soon as possible. 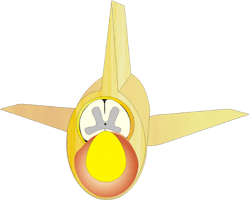 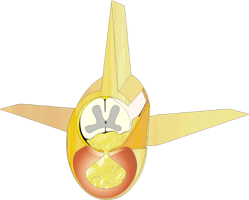 The aim of surgery is to remove the pressure on the spinal cord – decompression – and prevent further disc problems.

We can see the bulging disc in the diagram pressing on the spinal cord.
The side wall (lamina) has been removed allowing access to the disc material.
The disc material is being scooped out with a special tool. (no 1 cerumen loop) 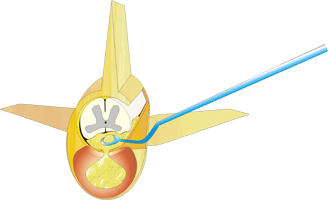 Degenerative Lumbosacral Stenosis is narrowing of the lumbosacral vertebral canal which results in compression of the cauda equina or nerve roots. It is most common in large breeds of dogs, especially German Shepherds, and is rare in cats. It results from degeneration and protrusion of the L7 to S1 disk, hypertrophy of the ligamentum flavum, or rarely subluxation of the lumbosacral joint. The cause is unknown, although German Shepherds with congenital transitional vertebrae are at increased risk.

Clinical signs typically begin at 3-7 years of age and may include difficulty using the pelvic limbs, pelvic limb lameness, tail weakness, and incontinence. Pain on palpation or extension of the lumbosacral joint is the most consistent finding. There may be proprioceptive deficits, muscle atrophy, or a weak flexor reflex in the pelvic limbs. Plain radiographs may show degenerative changes, but definitive diagnosis requires MRI, CT scan or myelogram.. Dogs in which mild pain is the only sign may improve with 4-6 wk of rest. Treatment consists of surgical decompression of the cauda equina and spinal nerves. Prognosis for recovery is good, although urinary incontinence may not resolve.

Degenerative myelopathy of dogs (chronic degenerative radiculomyelopathy) is a slowly progressive, noninflammatory degeneration of the axons and myelin in the white matter of the spinal cord. It is most common in German Shepherds and Welsh Corgis, but is occasionally recognized in other breeds. Nerves are coated with a fatty sheath – myelin – which allows nerve impulses to travel faster along the nerve. If the myelin sheath breaks down the nerves function very slowly. The nerves feeding the hind legs are the longest so this condition is noticed first in the hind legs. Affected dogs are usually over 7 years old. There is a progressive non-painful weakness and ataxia. Proprioceptive deficits are marked. We test proprioception (or position sense) by turn the paw over, moving one foot to the side, or swaying the hips. A normal dog will sense this movement and move its legs to keep its balance. Where proprioception is missing the dog will not notice this and will wobble or all over. Although the condition is non-painful it is progressive and most patients are euthanized in 1–3 years of diagnosis. Treatment with essential fatty acids may be beneficial.

Infectious Disease of the Spinal Cord

There are many infections that affect the spinal cord in animals. Inflammation of the meninges (membranes that surround the spinal cord) – meningitis often occur at the same time as inflammation of the brain – encephalitis. Usually the symptoms of meningitis appear first and are the predominant symptoms. The usual signs of meningitis are fever, hyperesthesia (exaggerated response to stimuli such as noise or light), neck rigidity, and painful muscle spasms.

Causes of meningitis and varied, they include; bacteria such streptococci, e coli and pasteurella; viruses such as canine distemper and FIP; protozoa such as Toxoplasma gondii , Neospora caninum , Sarcocystis neurona , Encephalitozoon cuniculi , and Trypanosoma spp; fungi such as Cryptococcus neoformans , Blastomyces dermatitidis , Histoplasma capsulatum , Aspergillus spp, and Coccidioides immitis; the rickettsial organisms that cause Rocky Mountain spotted fever, salmon poisoning, and ehrlichiosis; and Acanthamoeba spp.

Diagnosis is based on identifying organisms in a spinal tap. A small amount of CSF (spinal fluid) is drained from either a lumbar or cervical puncture and examined. Normal CSF is clear and viscous (thick). Infected CSF will have higher levels of protein, white cells and bacteria may be visible on a gram stain. Treatment is IV antibiotics and supportive therapy. Prognosis is guarded.

Tick paralysis is an acute, progressive, ascending motor paralysis caused by a salivary neurotoxin produced by certain species of ticks. 64 different species of tick have been identified that transmit this disease. In America the Rocky Mountain tick and the dog tick are the most common vectors.

Clinical signs may include loss of voice (laryngeal paralysis), gagging, coughing and regurgitation, pupils are dilated, the gait may by ataxic and dyspnea may be present. This rapidly develops into hind limb paralysis which progresses to include the forelimbs and then the head. Breathing becomes more and more labored as the paralysis ascends.

Removal of all ticks usually results in improvement within 24 hours. Dogs should be given supportive therapy including oxygen if necessary.

Two other diseases may present in a similar way to Tick Paralysis; Botulism and Myasthenia Gravis.

Botulism is caused by ingestion of a neurotoxin produced by the bacteria clostridium botulinum, the can happen when dogs eat rotten carcasses or canned food that has gone bad. Botulism starts with paralysis of the head and spreads to the limbs and respiratory muscles. Treatment is symptomatic and mild cases will recover after 2 weeks. It is more common in birds than mammals; ducks are particularly prone to this disease. In people, Botox (botulism toxin) is injected into muscles of the face to paralyze them and reduce wrinkles – one injection lasts for 3-4 months. This was discovered in the 1950’s but only received FDA approval in 2002, in 2007 4.6 million Botox injections were carried in the USA alone.

Myasthenia Gravis is an autoimmune disease of dogs. Antibodies are produced to the acetyl-choline receptors on the nerve ending which prevents the muscles from contracting properly. The symptoms are muscle weakness which is more noticeable when the dog is tired and megaesophagus. The megaesophagus can lead to aspiration pneumonia. Diagnosis is made by injecting edrophonium hydrochloride (Tensilon) this Treatment required management of the megaesophagus (feed from a height etc) and use of anticholinesterase drugs such as pyridostigmine bromine (Mestinon) or neostigmine (Prostigmin). Corticosteroids may also be helpful.

Congenital Diseases of The Spine

There are many inherited diseases of the spine in dogs. Wobbler’s syndrome has already been discussed. Malformations of the vertebrae can occur such as shortened vertebrae in screw tailed breeds and in German Shepherd dogs transitional vertebrae are responsible for lumbosacral disease.

The following diseases develop within the first year of life and most have no known treatment conditions you may encounter; they are: