Most young animals have intestinal parasites. Many parasites are transmitted from the mother to the young directly through the womb or milk to the developing fetus or newborn animal. Most intestinal parasites migrate through other organs of the body before arriving in the intestine. During this migration period, the parasite may cause disease of the lungs, liver, heart, muscle tissue or other internal organs. This parasitic migration ends when the worm arrives in the intestine. The intestine is the final residence for parasites because the parasite eggs can exit easily in the stool. Most worming medications only kill the intestinal form of the parasite, therefore, most wormers do not affect the stages migrating through the tissues. Synchronized re-worming programs, based on the life cycle of the parasite, are therefore necessary to completely eradicate parasites from the body. This is one reason to learn the life cycle of each parasite as we go through this course. Newer worm medications are more effective against the tissue forms of intestinal parasites yet none is 100% effective.

We diagnose parasites by examining the pet’s stool for worm eggs or larva that were deposited by adult parasites in the small intestine and colon. Diagnosis of a parasitic worm infection may be impossible if the animal does not have eggs present in the stool. Young animals and animals with a history and clinical signs typical for intestinal parasitism should be given appropriate prophylactic worming to help eliminate intestinal parasitism as a potential for disease or human contagion. This is currently recommended by the Center for Disease Control.

The common parasites can be grouped into two major categories: worms and protozoa. Parasites typically feed on the intestinal cells or use the intestinal cells for part of their reproductive cycle. This causes intestinal disease with pain and discomfort to the animal. Parasites also reduce the ability to absorb nutrients, which may cause diarrhea and vomiting. The migrating forms of parasites cause disease to other organs of the body as well.

The fecal flotation is the backbone of parasite identification in veterinary practice. Fecal flotation is primarily used to identify the eggs of the parasites in the pet’s stool. Few actual parasite worms are seen on fecal flotation. The flotation process involves mixing a small quantity of fecal material with a solution. This liquid solution serves to disperse the feces, freeing up the worm eggs. The flotation solution causes most of the stool components to sink to the bottom of the test vial while parasite eggs will float to the top of the solution. This separation of the fecal material allows for the eggs to be harvested at the top of the solution. The most common way to collect these eggs for examination is to allow the eggs to stick to a cover slip or glass slide placed on the top of the vial and in contact with the flotation solution.

The fecal flotation should set for a minimum of 10 minutes. The slide (or coverslip) may be removed from the fecal container and examined, then replaced on the flotation device if a longer flotation time is desired.

The slide has a coverslip placed on it and the entire area is examined in a methodical pattern (see Figure 1 above) to be sure that no eggs are missed. The slide is examined first on 10X, and then two fields are examined on 40X for any protozoa eggs or cysts. It is important to systematically scan the entire slide so no worm eggs or protozoa are missed.

Fecal smears are made with a very small amount of feces mixed in two drops of tap water. The amount of feces used is approximately what will fit on top of a cotton swab stick in a rounded mound – NOT the maximum amount of feces that a cotton swab stick will hold. Place the feces on the slide, then mix well with water and add a coverslip. The resultant preparation should be almost transparent. The fecal smear is usually read at 10X and 40X. Parasite eggs, bacteria, and protozoa in dogs are noticed. Smears are needed for all animals less than six months, all exotic animals and all animals with diarrhea or intestinal disease. Smears may be stained with the addition of a drop of iodine solution to make giardia and other protozoa stand out.

This procedure is also used to create a slide that is allowed to air dry for staining. A stained fecal smear can be examined under high power for the presence of inflammatory cells, bacteria, and protozoa.

Giardia in Dogs is identified on fecal smears as highly motile swimming organisms. Although giardia is small, it will be the largest moving organism seen on a smear. Look for motion to identify giardia. The cyst form of giardia will not be moving (picture 1 below). Giardia has several flagella that propel it and appear as if it has a tail (picture 2 below). The monkey face or banjo shape is characteristic for giardia (See Figure 3). 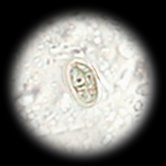 Picture 1. The cyst form of giardia will have no movement. 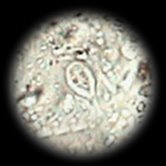 Picture 2. Propelled by flagella, Giardia appears to have tail.

Giardia parasite is difficult to identify on fecal flotation because the flotation solution distorts the shape of the cyst stage and kills and shrivels up the live trophozoite form. Fecal flotation using Zinc Sulfate solution offers the best likelihood of diagnosing Giardia.

The cyst stage is usually seen only on high power (40X) and is oval to egg shape and has the following internal features. There are matching eye like structures on the larger end of the cyst below these are some black dots and long stick like structures in the center. Many have described it as having a banjo or monkey face appearance.

Giardia is easily transmitted by fecal contamination and is infective when passed in the stool. Chlorination of the water and disinfection of contaminated cages is necessary for control. Giardia is contagious to people and birds.
Small bowel and large bowel disease and colitis can be seen in pets infected with giardia. Adult animals infected with giardia may be presented because of weight loss and a syndrome of decreased digestion of nutrients.

Figure 3. Giardia life cycle. Giardia has a direct life cycle that does not require developmental stages or intermediate hosts. However water contamination is important in giardia transmission.

Trichomonas is a protozoa and is identified on a smear as highly motile, squiggling, spiraling organism it is banana-shaped with flagella that are whip-like and flow more down the organism giving an undulating motion to one side. (Figure. 4) These flagella originate on the head and trail behind the organism as it moves through the solution. It is not uncommon to observe massive numbers of trichomonas organisms. Serious bacterial infection of the intestine usually set up the appropriate conditions for trichomonas infections.

Coccidia are protozoan parasites. The fecal flotation shows oocytes (egg cells) that have many different shapes depending on the stage of maturation of the egg (Figure 5). The size varies but is about one-quarter to one-half the size of a hookworm egg. The shell is very thin and oval shaped. The inner contents start out circular, filling three-quarters of the shape of the eggshell.

The spherical inner area will divide rapidly into two fusiform parts. These two will divide into four that are smaller and may fill the egg more. The development from spherical to a four-stage embryo may take twelve to twenty-four hours. This maturation must occur outside the bowel and must occur before infection of another animal. Although contamination of the environment is difficult to control, bleach will kill coccidia in the environment.

Coccidia are not seen grossly in the feces, but cause a characteristic yellow, pasty diarrhea that sticks to the rump of the pet. The diarrhea may also be bloody or loose but is almost always yellow in color.