Prairie dogs are different than real canine dogs when it comes to neutering. The testicles do not descend into the scrotum until much later in life. Early neutering however is necessary to prevent the undesirable behavior changes that result from when the prairie dog comes into “rut”.

The neutering procedure therefore requires surgical opening of the abdomen to gain access to the testicles. Prairie dogs are notorious for the large amount of fat in their abdomen and the testicles are buried, hiding in this fat hoping they will not be found.

The scrotum of prairie dogs is filled with this fat as well giving the appearance the testicles are located there. This is much to the chagrin of many inexperienced vets who have tried to find the testicles lurking in the scrotum during an attempted neuter.

The skin incision is made on the ventral midline just a few millimeters anterior to the prepuce. The incision is extended through the fascia and between the paired abdominal muscles on the linea alba extending about 1.5 cm.

The abdominal musculature on one side of the incision is lifted to allow a spay hook to be advanced laterally to the area of the inguinal canal. The spay hook is then rotated to hook the fat that will contain the testicle and pull it out of the incision. The abdominal fat is exteriorized, and the testicle and testicular vessels will be observed on the dorsal surface of this fat. The testicular vessels are ligated within the fatty tissue. The fat attached to the caudal pole of the testicle is also ligated and the testicle is removed between the ligatures.

The same procedure is repeated on the opposite side.

Closure of the wound is important as prairie dogs are noted for self-mutilation of surgical wounds. Use small diameter absorbable suture 4-0 to 5-0. Close the abdominal mussels with a simple continuous pattern anterior to posterior, tie the suture but do not cut it to minimize foreign material reaction, and continue with the suture anteriorly to close the subcutaneous fat. Similarly, redirect the suture pattern caudally but this time using a subcuticular pattern to close the skin seamlessly, and finally burying the knot in the distal area of the wound. 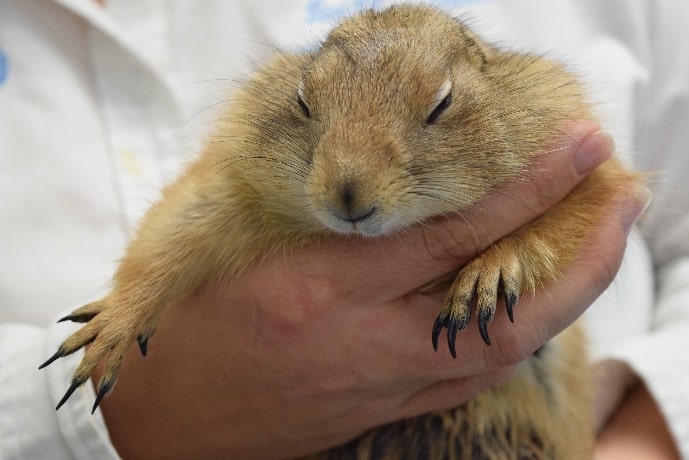