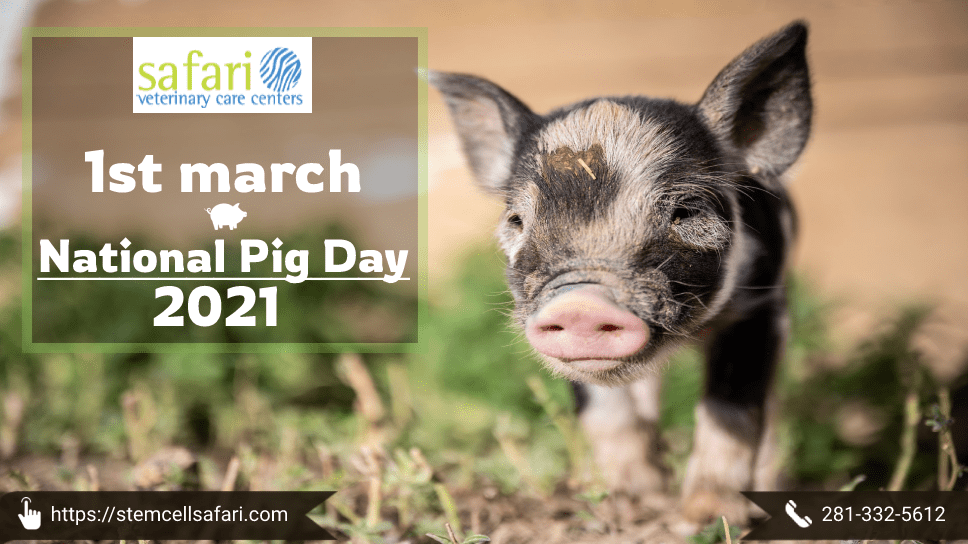 March 1 is not a day to visit an emergency hospital but a day to celebrate the domesticated pig. It is National Pig Day, a day to recognize how much pigs have become part of America’s culture. Pigs are seen in stuffed animals, piggy banks, art, costumes, books, movies, and even on the dinner table.

Pigs have lived in every part of the country, especially in zoos and farms for several years. They are loved by all and sundry, and a few of them have been adopted as pets, which has prompted visits to the Veterinary Clinic – League City when they fall sick.

Therefore, it is only fitting to set aside and dedicate a day to celebrate this endearing creature and learn how they became part of America’s history.

According to fossil records, pigs have roamed Earth as far back as 40 million years ago. It is believed that pigs were first domesticated about 9,000 years ago in Western Asia and China. Pork consumption was summarily banned in the Middle East and some parts of Asia.

About 3,500 years ago, the Romans introduced breeding for pigs while Europeans took on refining every purpose-driven pig breed up to the 16th century.

It was around this period that domesticated pigs appeared in North America. It is believed that Christopher Columbus had up to 8 pigs with him when he voyaged to Cuba in 1493. This was right after his initial voyage to discover the ‘New World.’

Hernando de Soto, Columbus’ successor to exploring the Americas, brought up to 13 pigs with him when he first landed in what is now known as Tampa Bay, Florida. They were the first set of domesticated pigs in what finally became the United States of America.

National Pig Day came about in 1972 when two sisters, Mary Lynne Rave and Ellen Stanley, decided it was high time they accorded the pig its rightful place as one of man’s domesticated and most intellectual animals.

As with cats and dogs, pigs – especially the pot-bellied variety – make great pets that get taken to the Veterinary care center if they fall ill.

Today, there are more than 1 million pigs throughout the United States and Canada. The most frequent interaction many people have with pigs is at the dinner table. Pork is presently the most popular meat, with more than 80 million tons produced every year. It makes up to 40 percent of all meat consumption today.

The National Pig Day is now a holiday with many events and celebrations at schools, zoos, nursing homes, and even at an affordable pet clinic near me. Pig parades, pig parties as well as gatherings with pig collectibles are just a few of the events that commemorate National Pig Day.

Pigs are intelligent and smart animals, though only a handful of individuals are aware of the animal’s high level of intelligence. They will remain household pets for many families as they can be taught new tricks and trained.

For instance, in 1772, a trained swine called the Learned Pig once lived in Dublin. The smart animal told time, was able to count, and even displayed a wide range of tricks to entertain people in the streets.

National Pig Day is a special day to love and cherish pigs and the beautiful qualities they hold. They must be treasured and cuddled, and if any pig is found hurt or ill, the animal should be taken to the League City animal clinic for a prompt examination.