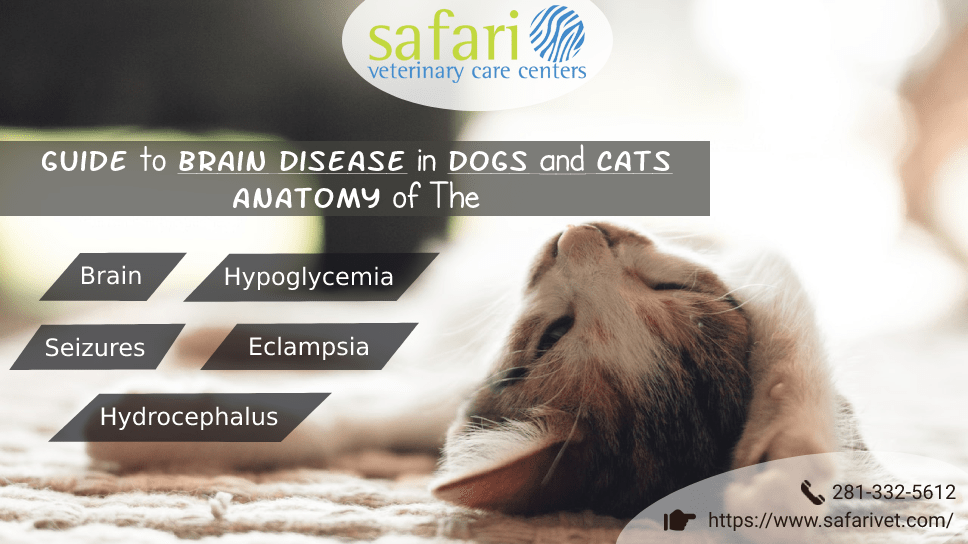 September 16, 2020Brain DiseaseAnatomy Of The Brain, Brain Tumors In Dogs, Disease In DogsSafarivet

Like humans, pets also suffer from brain diseases such as brain tumors. Sadly, most pet owners do not notice the signs until the conditions become worse. The best way to handle brain tumors in dogs and cats is to detect the symptoms early enough and have your vet carry out a proper diagnosis before treatment.

So what are the symptoms of brain tumors in dogs and cats? Seizures are the most common signs indicating brain tumors in your dog. Apart from seizures, other signs include:

Symptoms may differ in different species of dogs and cats, but it should revolve around any of the above. Once you notice any of such symptoms in your dog, you should seek your vet’s help without further delay to save your pet’s life.

The majority of primary brain tumors are characterized by solitude; though multiple brain tumors have been clinically reported. Metastatic or secondary tumors are somewhat less common, resulting from metastases or local extension from primary tumors at a different place.

What Dog Breeds and Cats Are Prone to Brain Tumors?

Brain tumors in dogs are relatively common in nearly all breeds, irrespective of age and sex.

However, in-depth studies of the anatomy of the brain indicate that brain tumors increase over five years of age with certain breeds.

In dogs, breeds such as the golden retriever, Boxer, Scottish terrier, Doberman pinscher, and the old English sheepdog reportedly develop intracranial tumors much more commonly than other breeds.

Primary brain tumors are known for growing slowly and what is most unfortunate is that the brain adapts well to the gradual increase in intracranial pressure. During this period, however, a history of subtle behavior changes and vague signs begin to emerge.

Clinical signs progress rapidly, even with slowly-progressive brain tumors. And this occurs when compensatory mechanisms have been totally exhausted. Tumors that proliferate don’t generally allow the same degree of compensation. And that is why an unexpected onset of severe neurologic malfunction may occur due to the absence of premonitory clues or signs.

Diagnosis of brain tumors is carried out via the imaging of a mass of tissue within the axis or next to the brain.

The possibility that the mass appeared as a result of infection must be ruled out. This is done by carrying out infectious tests on spinal fluid or blood and by analyzing the cerebrospinal fluid (CSF).

Brain disease in dogs and cats can affect any part of the brain, thereby causing several problems. And when the brain tumor progresses, it could result in coma and death.

In most cases, however, seizures may be the only sign which indicates that your dog could have a brain tumor. Pain generally associated with brain tumor affects the pain-processing portion of the spinal cord or brain or stretching or inflaming the lining of the brain known as the meninges.

If your pet shows any signs of brain diseases, you should seek the help of a professional vet in time to prevent worsened situations.